Their differences will be discussed in detail in this article. Both these types of networks are used to transmit information with the help of electrical signal but differ in the way the information is transferred. In Analog computers, the data is forwarded with the support of continuous signals while in digital computers the data is transmitted with the aid of discrete signals which are usually in the form of binary numbers.

The best example of the analog device will be oscilloscope which is still used by engineers for taking measurements. While the best case of Digital devices will be a pedometer which gives the exact number of steps. Analog computers are slower in speed and are less reliable whereas Digital computers are fast speed devices that can be relied upon. Digital computers are being used all over the world while Analog computers have been restricted to specific fields such as medical and engineering. A further explanation of both these types of the PC is given in the paragraphs below.

What are Analog Computers?

Analog computers can be a vast field to define. In simple words, a computer that uses the continuous signal for its operation is called an Analog computer. Because of this type of indicator, they are able to receive input and produce output regularly, and this helps in solving complicated processes. However strong the signal may be and even if it is in the form of electrical or mechanical, analog computers are able to deal with it. The emphasis in this type of computer is on obtaining a solution, however, error-prone it may be. Analog computers started way back in the 19th century and have advanced over the years. Before the origin of digital computers, they were considered the best forms of devices. An example of the analog computer will be a mercury thermometer which calculates the temperature of the human body and then displays it as a range of mercury. Because it has noise in its system that affects the results as well while storage process in analog devices is complicated as they may hold values but that is only possible for a certain amount of time. What are Digital Computers?

Digital computers are defined as devices that use the discrete signal for their processes which are in the binary form. In Digital computers, the input is coded in the form of zeroes and ones to get a more accurate result. An example of a digital computer will be a calculator in which all the coding is already done, and you get a correct result which is not possible in the case of analog devices. This is also because of the reason that e is minimum noise in the system because the electrical noise coming is in the form of an analog signal. Calculations, in this case, take less time because all the coding is already done and the results which are displaced can be as accurate as possible. Digital devices have taken over the analog ones in recent times because of their effectiveness. It is more reliable, has greater space and can store data for a long time although its cost is higher. The factor that gives it more edge is that there are no observatory errors since all the calculations are done by the computer and values are displayed correctly.

In the end, the article has explained both the terms with equal emphasis and it can be seen that there is very little difference between the two, which in simple words are already considered synonyms of each other and therefore, a clearer understanding should develop.

What is Dicot Stem?

The dicot stem has single layered epidermis along with the thick cuticle. Mainly the difference in arrangement of the vascular bundles make the difference between them and the monocot stem. As the dicots are more complex as compared to the monocots, they may or may not have the epidermal hairs, which are essential for the insulation, warmth and absorption in plants. Their vascular bundles are arranged in the form of one or two broken rings.

These bundles are definite in shape and size and are smaller in size as compared to the bundles in the monocots.

The hypodermis in the dicot stem is made up of the collenchyma. The main function of the hypodermis is to secrete the chitinous cuticle; it is present in the epidermal layer of cells in plants. In dicot stem, the epidermis is the outermost layer along with the multicellular epidermal stem hairs. The other important regions of the dicot stem are cortex, medullary rays, pericycle and pith. The vascular system in dicots comprises of the two distinct regions cortex and stele, which are absent in the monocot stems. The bundle sheaths, which have the main function to regulate the substances between the parenchyma and vascular tissues, are absent in the dicots.

What is Monocot Stem?

The monocot stem also has the single layered epidermis along with the thick cuticle, although the epidermal hairs are absent in the case. Due to the presence of the lateral branches, circular stems are absent in monocots. As we know that the main difference between dicot and monocot stem is due to the arrangement of the vascular bundles.

In monocot stems, the vascular bundles are scattered and are arranged indefinitely in such a way that they are spread throughout the steam area. Although the bundle sheath is present in this case, which surrounds these scattered bundles. The hypodermis in the monocot stem is made up of the sclerenchyma. As the vascular bundles are scattered, they also lack the distinct cortex and stele. 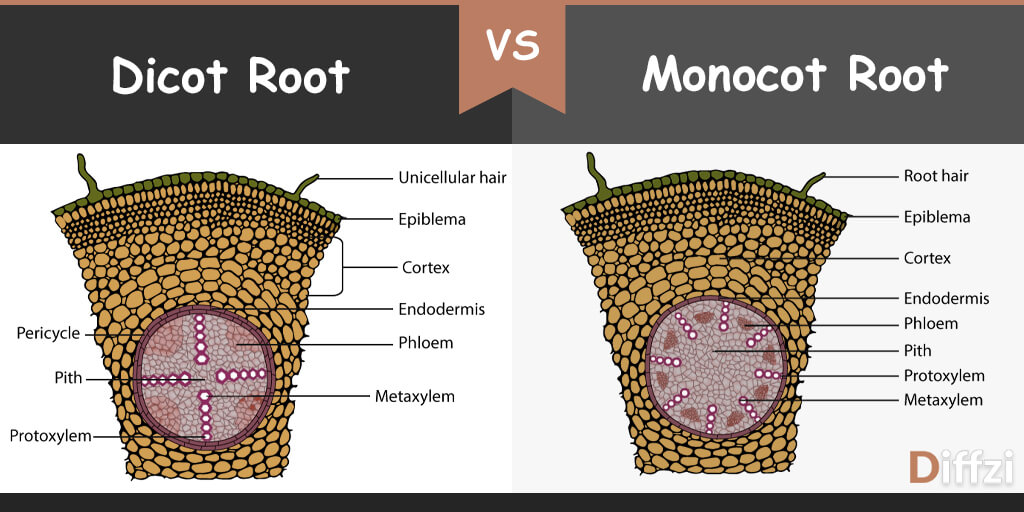