A tumor is formed when the uncontrolled division of the cells occurs, and a mass appears in the form of a lump which is termed as a tumor. A tumor may be benign or malignant in nature. A benign tumor is that which does not spread beyond its limit and never invades its surrounding structures. While a malignant tumor is that which invades its surrounding structures and spreads in the body at distant places. The spread of a malignant tumor is termed as metastasis.

Histologically, the benign tumor appears similar to the cells of origin while malignant tumors vary ranging from similar to the cells of origin to totally anaplastic (different). Tumor edges of benign tumors grow outward in a smooth fashion and do not infiltrate to surrounding tissues while tumor edges of malignant tumors grow outward in an irregular fashion and infiltrate the surrounding structures.

Benign tumors have slight vascularity. They have a poor blood supply. While malignant tumors have moderate to the rich blood supply and that is the reason they grow rapidly because they are provided with adequate blood supply required for rapid growth.

Benign tumors do not affect the systems of the body unless they secrete any hormone which is less common. While metastatic tumors have adverse systemic effects. They spread to the brain, bones, liver, heart, kidney and other distant areas of the body and have adverse effects on their functions.

What are Benign Tumors?

Benign tumors are the types of tumors that are well-differentiated and confined to the site of their origin. They do not infiltrate the surrounding structures. The cells of benign tumors do not separate from the clone of their cells and never spread in the body. That is why they are called as benign (innocent) tumors. Benign tumors are mobile. They have their own capsules, and in case they do not have a capsule, they are sharply demarcated from the surrounding tissues. The cells of benign tumors histologically appear similar to the cells of their origin. The rate of their growth is slow, and they have a poor blood supply. Due to poor vascularity, they are not provided with enough nutrients to grow rapidly, that is the reason their growth rate is very sluggish.

Examples of benign tumors can be given as fibroadenoma of breast, hepatocellular adenoma, squamous cell papilloma, myxoma, and schwannoma. 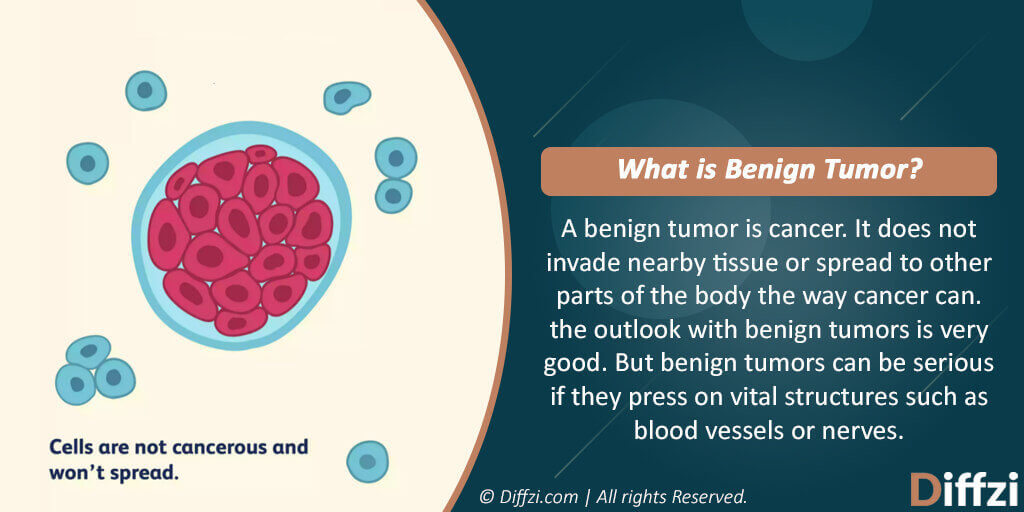 What are Malignant Tumors?

Malignant tumors are the type of tumors that have to potential to invade the surrounding tissues. The degree of their differentiation varies. They may be completely differentiated or completely anaplastic or range in between these two extremes. Malignant tumors do not have a capsule and not demarcated at all from the surrounding tissues. They often have a rich blood supply, and that is the reason their growth rate is high. They have the ability to separate from the clonal cells and invade the distant areas of the body. This property of malignant cells is called metastasis. The treatment of malignant cells (cancer) is done by chemotherapy, radiotherapy or surgery. Examples of malignant tumors are hepatocellular carcinoma and carcinoid tumor. 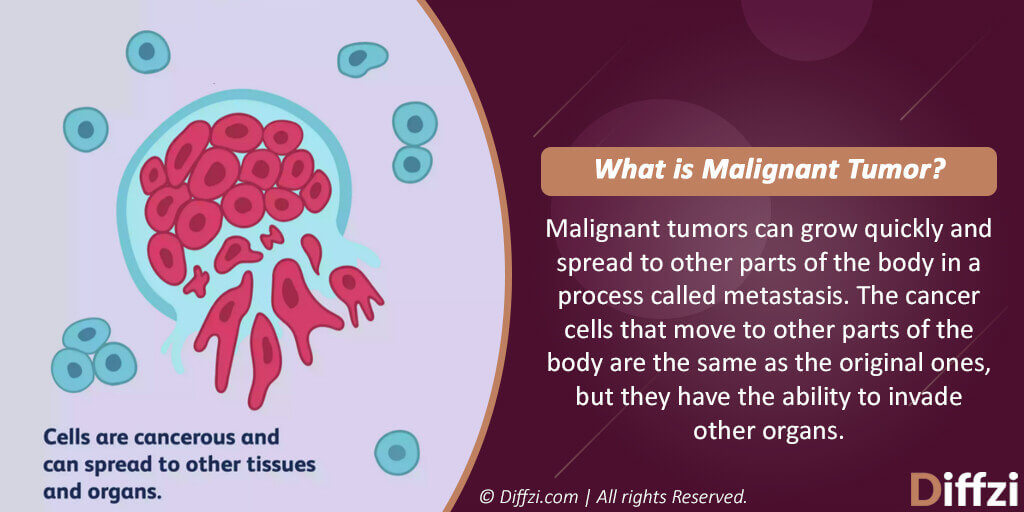 Benign and malignant are two kinds of tumors that commonly occur in the general population. Often they are confused with each other, so it is compulsive to know the differences among both of them. In the above article, we learned the clear differences between both types of tumors.