Plants are present in a wide range around us. It is one of a large kingdom of the organism. Plants have different types of species. One of their classifications is as monocot and dicots. Monocots and dicots differ from each other in four structures: leaves, stems, roots and flowers. This difference begins from the seed and remains throughout the life cycle. Monocots have one cotyledon while dicots have two cotyledons. Monocots include all grasses and grass-like plants while dicots include all our trees, bushes, etc. Monocots leave mostly have parallel veins whereas, dicot leaves have net-veins. Dicot leaves have thick cuticle at the upper layer and thin cuticle at lower layer whereas monocot leaves have uniform cuticle on both the surfaces. Another main difference in monocot and dicot leaf is that monocot leaf has an equal number of stomata on either side, but dicot has more stomata at its lower surface.

What is a Monocot leaf?

Monocot leaves are present in monocot plants. Monocots have one cotyledon within their seed. They possess isobilateral symmetry. Monocot leaf has a double epidermal layer, one on the upper surface and the other on the lower surface. The thick cuticle is present on the outer surface whereas the lower surface has a thin cuticle.  The cells of the epidermis are filled with many chloroplasts. Bulliform cells are present on the upper epidermis. The epidermis of monocots also possesses many intercellular spaces in. The mesophyll is present in the spongy parenchyma. Monocot leaf has an equal number of stomata on either side. Monocot leaves possess parallel veins in them.  Many vascular bundles are present in them. The central vascular bundle is mostly larger than others. A double layer sheath surrounds each vascular bundle. The outer layer is thick and the inner layer is thin. Xylem consists of vessels and tracheids and occurs towards the upper surface. Phloem consists of tubes. Examples of monocot leaves are grass and other grass-like plants. 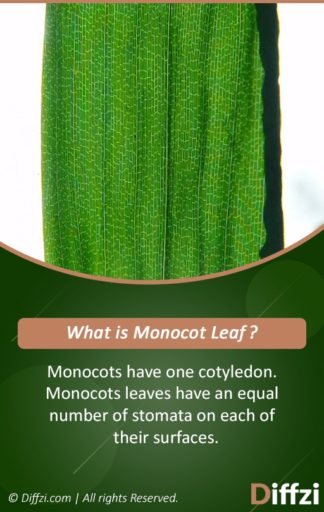 What is a Dicot leaf?

Dicot leaves are present in dicot plants. Dicots have two cotyledons within their seed. They possess dorsiventral symmetry. Dicot leaf also has a double epidermal layer, one on the upper surface and other on the lower surface. The cuticle is present uniformly on the outer and inner surfaces. Bulliform cells are usually absent. The mesophyll is made up of two kinds of tissues, one spongy parenchyma, and the other one is palisade parenchyma. Dicot leaves have large intercellular spaces in them. Dicots leaf have more stomata on their lower surface. Dicots leaves have net-veins in them. Many large and small vascular bundles are present in them. A bundle sheath surrounds each vascular bundle. Xylem consists of vessels and presents towards the upper epidermis. Phloem is situated towards the lower epidermis of them, and it also consists of tubes like in monocots. Examples of dicots leaves are trees and such other plants. 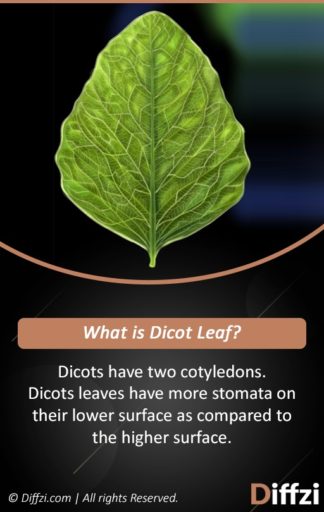