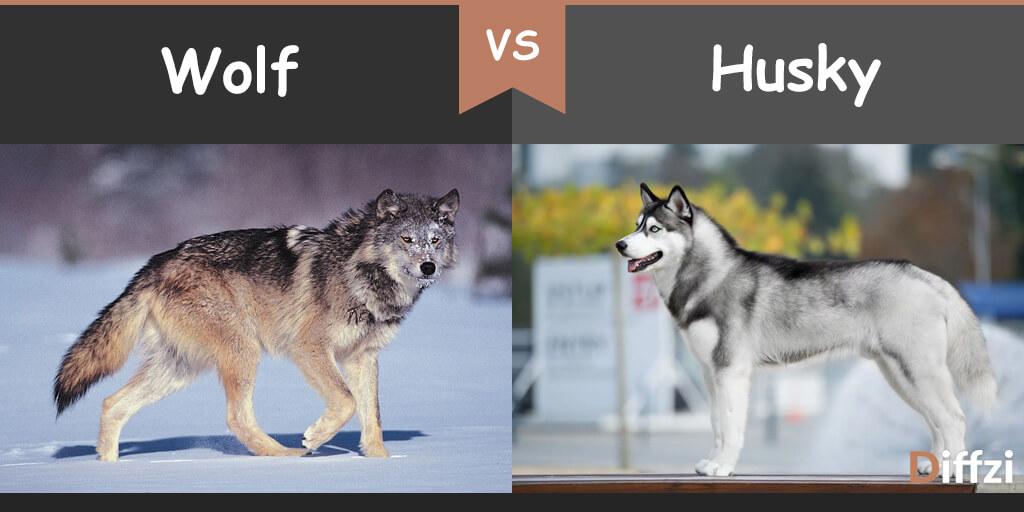 A lot of people got confused when they see a husky and wolf together and believed that husky and wolf are long-lost brothers. Many scientists also assumed that dogs are evolved from a wolf as a result of cross-breeding, but the reality is, both of them are a separate breed of animals, and there are significantly higher numbers of differences between them.

The main difference between wolf and husky is the breed. A wolf is the largest member in the canine family while husky is a breed of dog.

Let’s understand the comparison chart to clear our confusion!

Comparison Chart of Wolf vs Husky

Wolves belong to the class of the canine family that live in groups known as packs. It is a wild carnivore animal that can be found in many places throughout the Northern Hemisphere.

Wolves are known to be brilliant creatures and become independent at a very young age (minimum of two years old). By nature, wolves are wild and temperamental who are not easy to train. Wolves are social animals that mostly live in a pack of 5 to 20 members in a usually quiet area far away from the human population.

They range in size considerably depending on where they live and from which species they belong. Some of them are only 55 pounds, while others can be up to 200 pounds. Unlike huskies, the wolf has much longer legs with larger paws which enable him to walk across many different landscapes such as from snowy glaciers to boiling desert sand. Wolves generally have a big large head with golden or brown eyes. Its body is fully covered with a greyish-white thick fur with a much narrower chest and a reserved body language.

From research, it is found that the average lifespan of a wolf is from 6 – 8 years. At present, many species of wolves are considered to be endangered because people are hunting them to the point of extinction.

Husky is a domestic dog that resembles a lot to the wolf. Thousands of years ago, husky was used to pull sledges in the Chukchi Tribe. They were trained to pull light loads at moderate speed through the snow.

The word “Husky” is derived from the word “Eskimo” to refer to Arctic people. Huskies are medium-sized dogs that are covered with a thick double coat which keeps them protected from the harsh climate. According to some researches, the Siberian husky is capable of working temperature as low as -75 degree F.

A husky has almond-shaped fierce blue eyes, although they can also be green, yellow, brown, or heterochromia (two colours). Their tail is thick and bushy enough to wrap their faces while they sleep. Their breath warms the tail to keep the face and nose protected from the cold.

Like other species of dogs, huskies are energetic and have high stamina. They need plenty of exercises and playtime to keep them happy. Huskies are often used as a pet for households with children due to their friendly nature.

Key Differences between Wolf and Husky

Some people believe that huskies are evolved from the wolves, but in reality, they are not. A wolf is not only more giant with long legs, but also have a different colour and texture coat, different eye shape and colour, and a long narrow head and snout. Unlike huskies, wolves have a narrow chest with different size and shapes of ear. Lastly, a wolf is a wild animal that is aggressive by nature and is untrainable while a husky is a domestic dog that can legally be kept as a pet due to its loving and friendly nature.