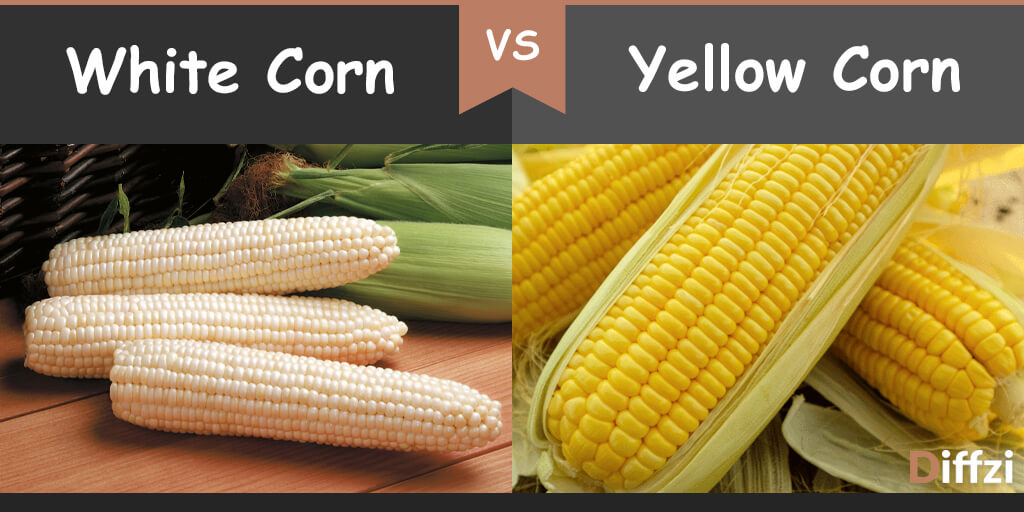 Corn also called maize is a grain crop that grows around the world and comes in a large and diverse palette of colors such as, blue, orange, purple, but the most common colors that can be seen everywhere are yellow and white corn.

People have a lot of opinions about corn. Some say yellow corn is the juiciest and sweetest corn while others say white corn has better flavor. Truth is, it is not the color that determines the flavor of the corn it is the variety of the corn. Corn is typically grown in three different forms that have been engineered for the minimum to maximum sweetness and those varieties come on all three colors, yellow, white, or bi-color.

What is White Corn?

The scientific name of corn is Zea Mays which is a grain crop and belongs to the grass family called Garminae. White corn is native to America specifically Mexico that is not only grain but also considered as fruit and vegetable.

During the Age of Discovery, white corn became very popular due to its versatility as a crop and can grow in a wide variety of climate conditions.

Most people believe that white corn is a variety of sweet corn with a higher sugar than the starch ratio.

The ears or body of white corn is tightly wrapped with pale lime green to white husks and one ear of corn contains up to 400 kernels growing in rows lengthwise. Unlike yellow corn, both the milk and kernels of white corn are creamy in color due to the presence of two recessive Y alleles.

The kernels of white corn contain plenty of sugar and water making it sweet and juicy but as the corn matures, the water content decreases, the sugar turns to starch making the kernels harder and tougher.

The nutritional profile of white corn is somewhat surprising, as it contains about 1.5 grams of fat in a large ear of corn, but only 115 calories with a high water content about 72.84 gram. White corn, besides low fat and high calories also are a good source of potassium, phosphorous, magnesium, Vitamin B1, and Vitamin B6.

The three most common uses of white corn are food, starch, and paper. It can also be dried and ground into flour for baked goods, tortillas, cereals and used as a crust/crisping agent for dishes both savory and sweet.

Lastly, white corn is also used for oil, as a sweetener in foods and beverages and as a base for beverage alcohol.

What is Yellow Corn?

Yellow corn is also called as “Indian Corn” or maize that belongs to the grass family Poaceae.

It is an edible grain that is rich in vitamins, minerals, fibers, antioxidants and was first cultivated by natives of Mexico about 10,000 years ago

Yellow corn that has pale to dark yellow kernels is mostly found in all parts of the world. It contains more lutein and carotenoids that give it its yellow hue.

The ears of yellow corn are wrapped in tightly bound lime hued husks with silks and a tassel extending out from the tip. Freshly harvested yellow corns are sweet in taste offering flavors of almonds and sugar. As the corn matures, the kernels lose their milky consistency giving it to a starchy consistency.

Yellow corn is a significant source of Vitamin A produced by beta carotene. One ear of sweet corn has the following nutrients per serving,

You can boil, steam, grill, or roast the yellow corn. Though, white corn is preferred for fresh eating in Latin cultures yellow corn is most often used for masa and tortilla making.

Yellow corn is also a hearty addition to soups, stews, and casseroles.

Both white corn and yellow corn has been a staple food in many parts of the world. White corn is generally categorized as sweet corn as it contains more sugar and water and is actually a mutation of the regular field corn with a higher sugar than the starch ratio of content while yellow corn is considered as having more nutritional value as it contains more lutein and Vitamin A.