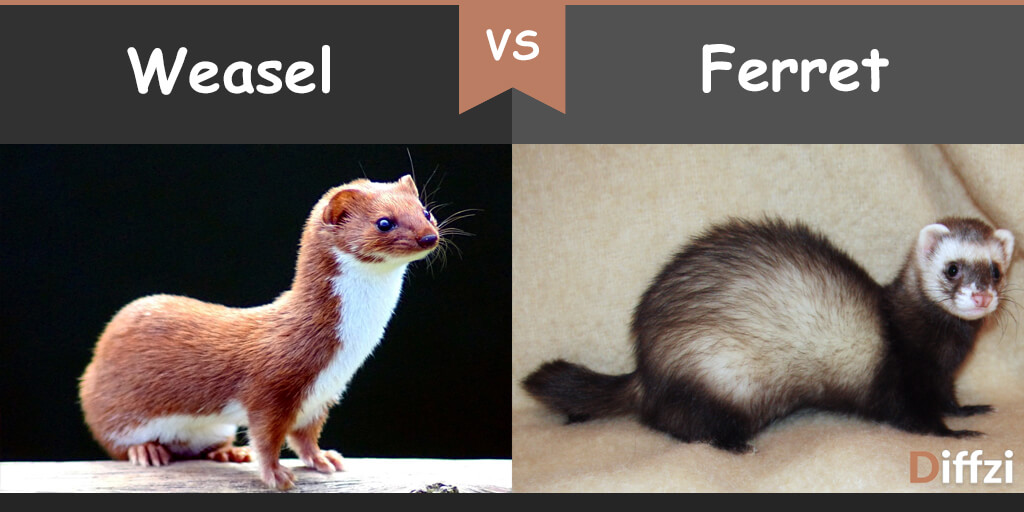 Both animals are swift, have long tubular bodies but inevitably differ in size, behavior, habitat, reproduction, and diet. Apart from taxonomical classification, the other main difference between them is that around thousands of years ago, ferrets are domesticated for various purposes while weasels are non-domesticated animals.

There are many other notable differences between them that you can find out below:

A weasel is a small mammal with cute little faces and long slender body that belongs to the Mustelidae family of the Mustela genus. They may look cute and lovable, but they are also bloodthirsty and are well-known as killing machines.

There is a strange fact for weasels, even when they are full, a weasel can kill their prey. The reason for their blood lust nature is the super-fast metabolism and need to kill and eat about 40 – 60% of their body weight every day.

Weasels are usually brown, black, or grey with a white or yellowish underbelly. They become all white in winter though their fur glows a bright lavender color when exposed to ultraviolet light. Weasels come in a variety of sizes, but the most noteworthy is the least weasel that is the smallest carnivore in the world and weighs about 1 ounce and can grow up to 4 – 10 inches long. Weasels are adaptable and can live in all over the world except Australia and Antarctica. For example, the long-tailed weasels are commonly seen in North America while the tropical weasels live in South America. Mountain weasels are found in east and central Asia while Japanese weasels are found in forests, villages, grasslands, and suburbs across Japan. They live in an extensive range of habitats such as coniferous forests, woodlands, farmlands, roadsides, and meadows.

They are fierce hunters and their diet mainly consists of rabbits, rats, lizards, hares, squirrels, frogs, birds, insects, and rodents. Weasels have a unique skill of hunting; they first intimidate their prey by hopping and dancing back and forth before killing them. They then hold tight on the prey’s neck and bite until the prey is dead.

The name ferret is the Latin word furittus, meaning “little thief”. This name refers to the common habit of a ferret that is secreting away small items.

Ferrets belong to the weasel family known as Mustelidae, which also includes polecats, ermines, and stoats. It is a small furry carnivore with a cone-shaped nose, long pear-shaped body with short legs, long claws, and long tail.

They domesticated about 2,500 years ago. Historically, ferrets were used for hunting rabbits and rodents. Their lean bodies and curious nature make ferrets naturals at getting down holes to chase rodents and rabbits out of burrows.  The domestic ferret can be seen in a variety of fur colors, including dark-eyed white, sable, black sable, silver, albino, cinnamon and chocolate. Black-footed ferrets are not nearly as colorful and are a pale color with white foreheads, muzzles and throats and black feet.

Ferrets are about the size and shape of zucchini and usually weigh around 1 to 5.5 lbs and have a head and body length of 8 to 18 inches. Their tails measure half their body length and range from 2.8 to 7.5 inches.

Domesticated ferrets commonly live in cages, but need at least two to three hours per day to run outside of their cages. They can also thrive in temperatures that are between 50 and 80 degrees Fahrenheit.

Ferrets are carnivores, which mean they can eat only meat and mainly hunt small mammals, such as, rabbits, prairie dogs, possums, hedgehogs, and rodents.

Ferrets supplement their diet with amphibians, birds, bird eggs, fish, reptiles, invertebrates and carrion and usually eat between 1.8 to 2.4 ounces of meat per day.

A domesticated ferret typically eats factory-made chow. A healthy diet for pet ferrets consists of 35 percent protein, around 20 percent fats and is low in carbohydrates.

Weasels and ferrets belong to the same scientific family, Mustelidae, but their physical appearance, diet, temperament, and hunting behaviour are different.