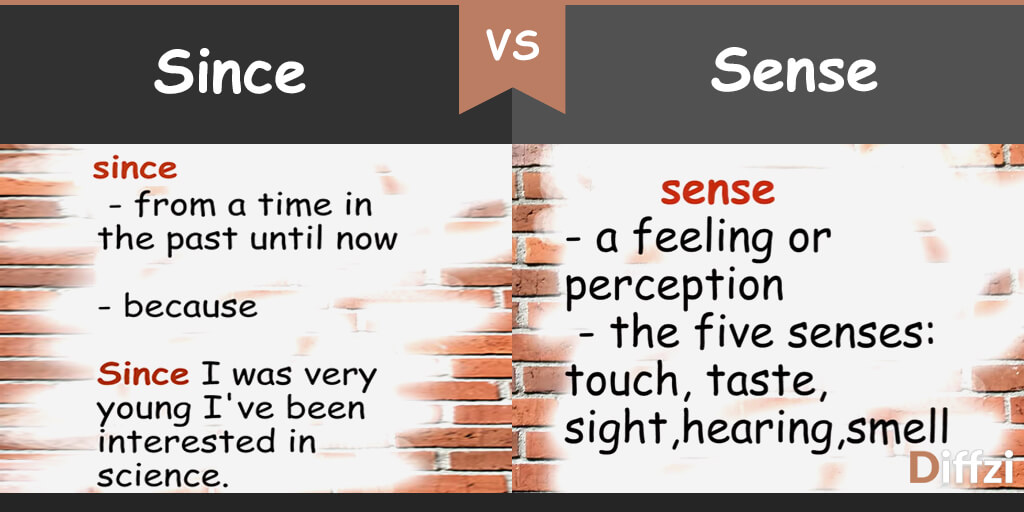 The main difference between since and sense is their usage and their meaning. Since is an English language word that can be used as a preposition, conjunction, and adverb of time, whereas, the sense is used as a noun which means “intelligence” and as a verb, it means “feeling”.

Since and sense may sound similar during pronunciation, but they have completely different meanings, that’s why people get confused sometimes. However, some children, teenagers and even adults of colleges mix up these words.
Since is used to indicate the meaning of the word because, or to show some type of time, on the other hand, the sense is used to indicate the five traditionally recognized senses of sight, smell, hearing, taste, and feel.

The term since means from then, up till now or time which occurs between then and now, before now. First, it has originated from the Latin language and later it has transferred to the English language, whereas the grammatical English language word is originated in between 1400-1450. Moreover, according to the oxford dictionary since is one of the top one thousand most frequently used words.

Since as conjunction (because)

Since as an adverb (time)

Since as a preposition

The term sense has originated between 1350-1400; first, it was introduced in the old French language as ‘sens’, but after passing through some stages of modification, it changes into ‘sense’. Sense as a noun can be defined as an ability due to which the body perceives an external stimulus as it refers to the five senses of sight, hear, feel, taste and smell.

As a noun, sense means something that you can feel but is not physical. Some best examples are a sense of hunger, a sense of being watched, or a sense of belonging and as a verb, sense means to be able to feel these things, can be physical or emotional for example sense movement from the corner of your eye.

Sense as a noun

Sense as a verb

Key Differences between Since and Sense

However, it is not so difficult to distinguish the differences between since and sense, as the main key difference is that since is mainly used as an adverb about time, on the other side; sense can be used as a noun or a verb. Moreover, these two words are usually misused by some English learners. In a nutshell, sense refers to the five basic human senses which are taste, touch, smell, sight, hear whereas, since is an adverb of time.