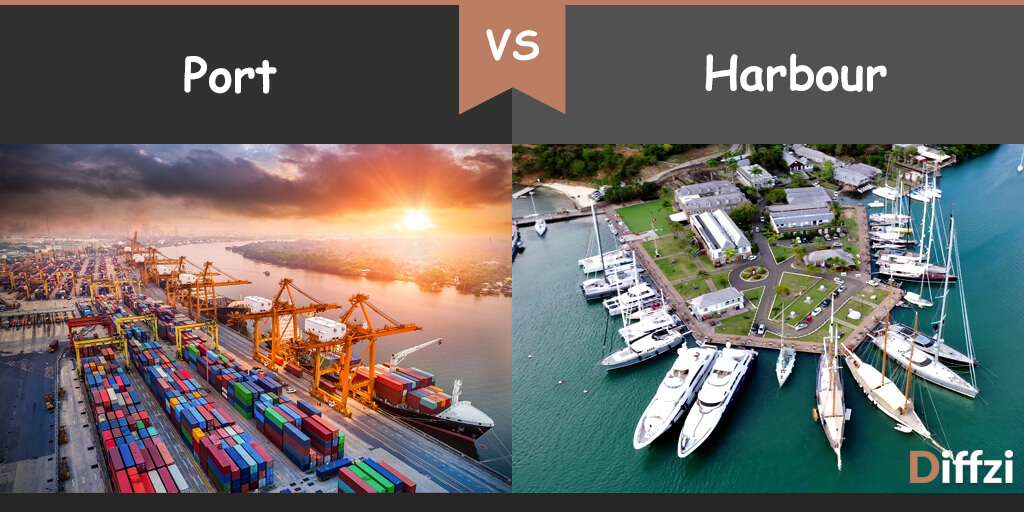 Port and harbour are two confusing words of English language that are presumed to have the same meanings because they both are places used by ships and other water vessels.

If we see the port and harbour from the coastline, they may look the same, but they serve different purposes. The main difference between them is the make. A port is a man-made haven that connects the land and the sea used for commerce and trade such as, loading and unloading of cargo, passengers, or anything that generates revenue. Whereas, the harbour is a natural area filled with water and sheltered by natural barriers like rock and land that provides a safe shelter for ships, boats, and barges from stormy weather.

A port can be defined as an area on the shores of a sea connecting the land and the sea for commerce and trade such as, loading and unloading of cargo, passengers, or anything that makes revenue.

It is man-made, bigger in size, and equipped with warehouses for storage of goods. It has many cranes for loading and unloading cargo and docks for parking ships. A port also has a number of amenities like restaurants, hotels, and offices to fulfill the need of the workers.

Port is a fusion point of water and land, and therefore there are number of trains and trucks that come into the port for either importing (picking up from cargo) or exporting (loading onto a ship)

Many countries have many ports, along with major rivers. Mississippi River in the USA, the Yangtze in China, and Great Lakes in North America are some of the examples of major rivers having many ports.

Each one of the ports is controlled, operated, and run by a Port Authority, which sets the commercial tariff for the handling of ships, goods, and passengers at that port. There are different types of ports such as, fishing ports, warm-water ports that do not freeze, inland ports linked to a canal or river, dry ports connected by rail or road, and cruise ship ports for passenger ships.

A port offers the following facilities:

The name harbour is derived from the old English language “herebeorg,” which means shelter or refugee.

A harbour can be defined as a body of water along the coastline protected by natural or artificial barriers that provide a ship with a safe anchorage and allows the transfer of cargo and passengers between the ship and the shore.

Most harbours are natural; however, some beautiful man-made harbours can be seen in different parts of the world. Natural harbours are usually surrounded by land on three sides and have one side opening to the sea through which the ships can pass. Whereas man-made have constructed with sea walls and jetties. A harbour offers the following:

Port and harbour may serve similar purposes, but there are many differences between them. A port is a commercial place along the coastline that is mainly used for import and export of goods and cargo from one country to another. We can relate a port with an airport where airplanes arrive and depart. On the other hand, a harbour can be a man-made or a natural area connecting a piece of land with a large water body that is mainly used to provide shelter to ships and vessels from lousy weather. Harbours are used for safe anchorage of ships. Natural harbours are surrounded by land on most sides but have an entrance point to the sea.

When harbours are artificially created, they serve as ports. In ancient times, places that had natural harbours were of prime importance for trade between countries. These were the places where many of the most important cities were built in those times. Ports are mostly man-made, and their location along the coastline is chosen where the water is navigable. It is also close to land facilities and infrastructure. One point to remember is that ports can be built inside harbours, but harbours cannot be built-in ports.