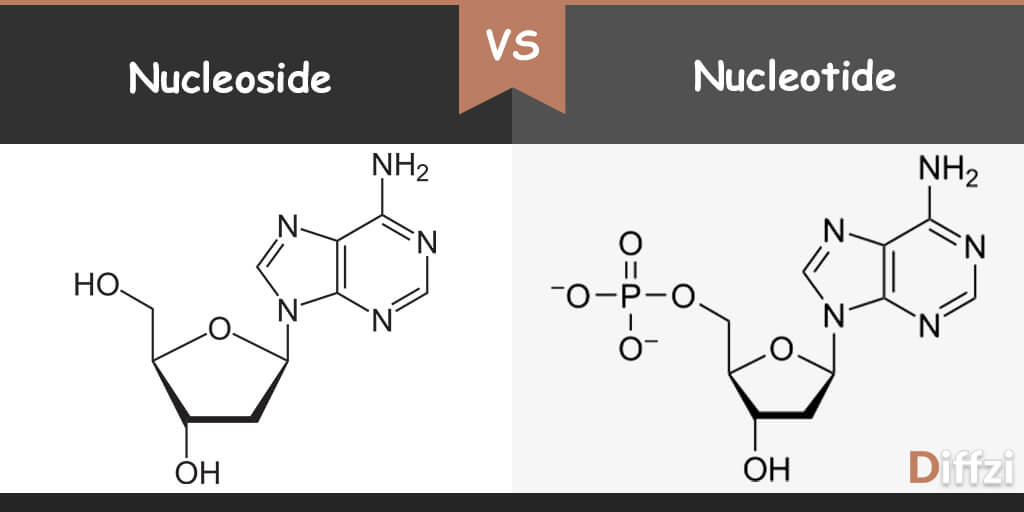 The main difference between nucleoside and nucleotide is molecular composition. If we carefully look at the structure of these two compounds, we will observe that,

“nucleosides contain only a nitrogenous base and a sugar group whereas nucleotides contain sugar, base, and a phosphate group”.

Nucleoside and nucleotide are building blocks of DNA and RNA that are vital molecules present in all living cells. They help in encoding all the information required for the survival, growth, and reproduction of the cell.

Look at the comparison table to understand the actual difference between these two;

“Nucleoside is an organic compound that contains a nitrogenous base covalently bond to a ribose or deoxyribose sugar”.

The nitrogenous base can be of any type depending upon the kind of nucleoside to be developed. Some common examples of nitrogenous bases that can be used as a building block of the nucleoside are adenine, cytosine, guanine, and thymine etc.

Nucleosides and nucleoside analogues are used in antiviral and anticancer drug therapy. These drugs usually are hydrophilic in nature and need specialized transport proteins to facilitate their uptake or release from the cell.

Nucleoside transporters are supposed to play a key role in the disposition and nucleosides and nucleoside analogs. A nucleoside can easily become a nucleotide after the attachment of one or more phosphate groups to it.

“A nucleotide is an organic compound serves as the building block of DNA and RNA”.

Unlike nucleoside, a nucleotide is made up of three parts,

Due to end-to-end connecting of nucleotides form the backbone of DNA and RNA after the removal of a diphosphate to join 5′ phosphate group of the very first nucleotide with the 3′ OH group of the next nucleotide by a phosphodiester bond. The nitrogenous bases in RNA are adenine, guanine, cytosine and uracil. However, in DNA, uracil is replaced by thymine. DNA is a double-stranded molecule, which consists of directionality in each of the two chains. One chain in the double-stranded structure bears a 3′ to 5′ directionality, while the other chain bears a 5′ to 3′ directionality. Two strands of the DNA is held by the hydrogen bonds, which are formed between complementary nucleotides.

A nucleotide within a cell is responsible for making up the genetic material of all known living things. Apart from the storage of genetic information, a nucleotide also acts as messengers and energy-saving molecules.

Moreover, nucleotides may also serve as a source of energy. For instance, ATP is widely used as an energy source in many biochemical processes, whereas GTP serves as the energy source for the synthesis of protein.

On the other side, cyclic AMP is responsible for the signal transduction pathways of both nervous system and endocrine system. Other than that, dideoxynucleotides are used in sequencing in order to achieve the chain termination. LNA, PNA, and morpholino are analogous for the sugar backbone in RNA, regulating the gene expression.

Key Differences between Nucleoside and Nucleotide

Nucleosides and nucleotides are highly similar with only one structural difference. But this minor difference translates into a vast difference in the functionality and applicability of these two molecules. The unique molecule (phosphate group) is responsible for activating the sugar and nitrogenous base complex. It also allows it to bind it to other bases with the help of phosphodiester bonds.

Furthermore, nucleosides are suitable anticancer and antiviral substances while nucleotides are building blocks of DNA and RNA, and some are energy molecules. However, malfunction nucleotides can cause fatal cancers too.