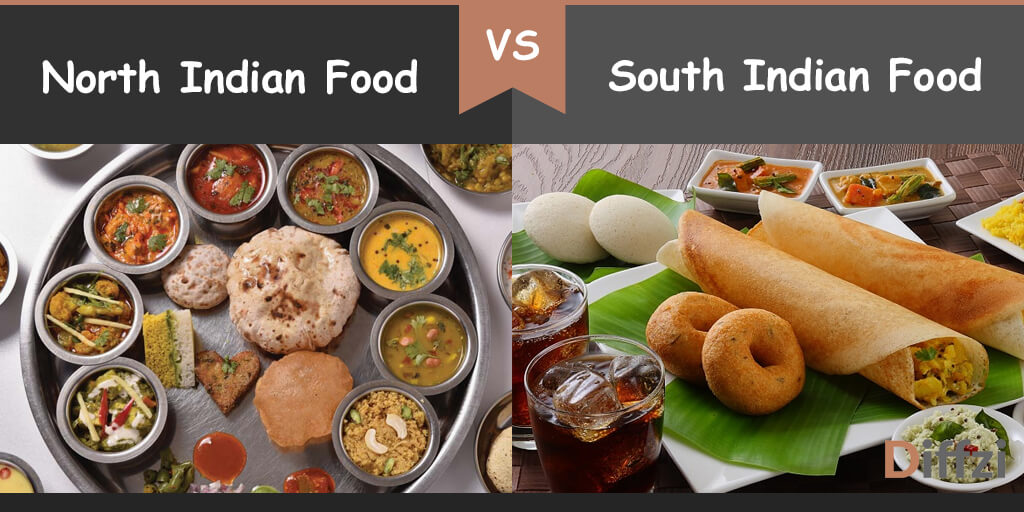 Getting the idea of the main difference of the North Indian Food and South Indian Food is very simple as the wheat is the staple food of the people living in the Northern side of India while the rice is the staple food of the Southern Indian people. Most of the Northern Indian food varieties has been much influenced by Mughlai cooking techniques. In the people of Northern Indians, you will find both the vegetarians and non-vegetarians ones and the most things among all of them are the excessive use of wheat.

On the other side, the Southern Indian people are fonder of using more vegetables, rice, and seafood as compared to the North Indians food habits. In the recipes of the South Indian Food, adding more coconut is the common custom than that of the North Indian food. In the North Indian cuisine, you will discover the heavy influence of the Arabs and Persians and this is the major reason that these dishes are much heavier and creamier while comparing them with the South Indians. The South Indian dishes contain rice and coconut in most of the cases and the dishes have higher water content.

One of the major characteristics of the North Indian Food is the huge influence of the Persian and Mughlai style of cooking no matter if the food is cooked for the vegetarian or non-vegetarian person. A variety of fresh seasonal fruit along with the vegetables and spices that are growing in North India can be found in different dishes as well. The basic ingredients of the North Indian food are the onions, tomatoes, ginger and garlic. The taste of these dishes is developed with the help of the curries, spices, ghee and oil. The use of the rice can be observed in the pulaos (pilafs) or biryanis in most of the situations.

The Sothern Indian food, on the other hand, is mostly composed of the dishes in which the utilization of the rice and coconut is very common. In the process of making the chutneys, and curries, Coconut is used. The most popular dishes of the South Indian food are the dosas and idlis in which a mix of rice and lentils are employed.

The use of Seafood dishes is also frequent in the South. From the medical point of view, the south Indian food is considered to be healthier due to the prime reason of less use of the rich creams and ghee no matter if they are made for vegetarian or non-vegetarian people. The people who are fond of eating the spicy dished must prefer the South Indian dishes because they are much spicier than that of the northern dishes.

The flavor of the Southern dishes are said to be sharp and intense that are mostly surrounded around rice. In the curries, you will disclose the more content of water with additional nutritional benefits by using the coconut and native fruits in their preparation procedure. The names of the most famous South Indian dishes are dosa, idli, rasam, and uthappam while in the desserts, the Payasam is tasty.