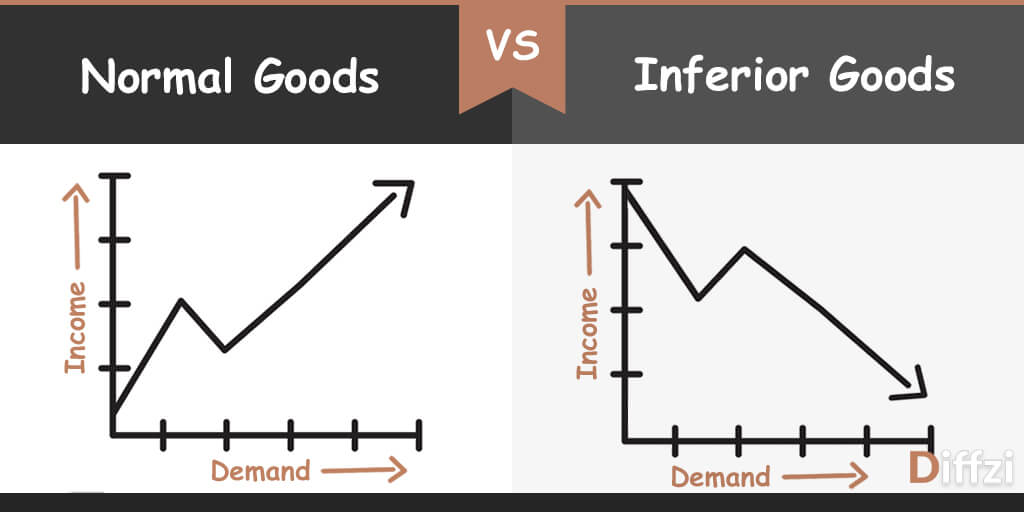 Look at the examples of our daily life below to understand the real difference between the two:

What Are Normal Goods?

A normal good is a type of good for which demand increases when the consumer income increases. The demand shows a direct and elastic relationship between income and demand for the good. In other words, changes in income will positively change the demand of the consumer.

For example, when your income was lower, you bought an Android phone because the brand was cheap and affordable for you. After some time, you got a new job with 20% rise in your monthly income now at this time you decide to buy a new iPhone that you have been waiting to purchase for a long time. It only becomes possible due to the increase in your income accordingly now iPhone is your normal good.

What Are Inferior Goods?

An inferior good is a type of good for which demand decreases when the consumer income increases. The demand shows an indirect and negative elastic relationship between income and demand for the good. In other words, changes in income will negatively change the demand of the consumer. There are many examples of inferior goods in our daily life. A number of us may be more familiar with many of the everyday inferior goods we come into contact with. For example,

When people have lower incomes, they are more likely to buy these kinds of products. But when their incomes increase, they often give up the inferior goods for more expensive items.

Consider a consumer who gets a raise from an employer. Even with the rise in income, she may continue to buy McDonald’s coffee because she prefers it over Starbucks, or she may find a no-name clothing piece better than the more expensive branded clothes. In this case, it is just a matter of personal preference.

Inferior goods are not always the same in different parts of the world. For example, something as common as fast food may be considered an inferior good in the USA, but it may be deemed a normal good for people in developing nations.

It is important to understand that the increase or decrease in demand for normal or inferior goods does not always depend on the status of income and sometimes it is the preference of the consumer who decides whether he wants to buy a normal good or an inferior good.