The key difference between mutation and variation is that mutation is the sudden change in the DNA either in the nucleotide sequence or in base pairs while variation denotes how the individuals or group of individuals differ from each other in phenotype. 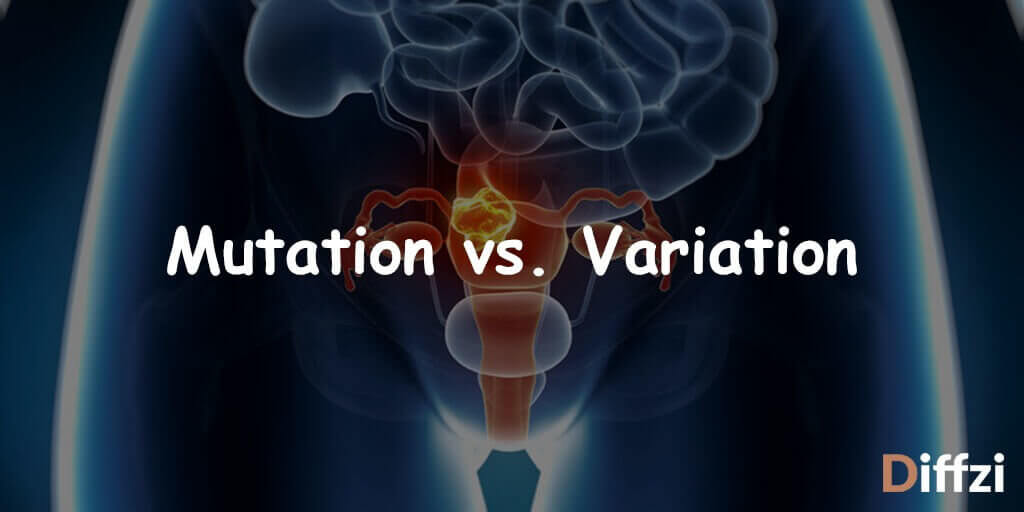 There are many differences between mutation and variation either both are linked with each other. Mutation refers to ‘sudden change in the gene’ at DNA level either in the nucleotide sequence or base pairs. While variation indicates the distinct features among different organisms or group of organisms of the same species.

The effect of mutation occurs on the single organism while variation is seen among individuals or group of individuals of the same species.

There are many agents that may cause mutations, i.e., ionizing radiations, errors in DNA replication,  chemicals, radioactive rays, certain mutagens or X-rays. While the causative agents of genetic variation are crossing over, gene deletion, gene insertion, translocation of the gene, mutation, genetic drift, genetic flow, and environmental factors.

The mutation may be beneficial or harmful for the individual suffering from it. It may cause severe diseases to the organisms or may adapt them better to their environment while genetic variations according to natural selection are usually very beneficial for species. They make them able to survive in a better way in their environment.

Contents: Difference between Mutation and Variation

What is a Mutation?

Mutation is the sudden genetic  change at the DNA level due to change in the nucleotide sequence or sequence in the bases. Mutations may be in the germline cells or somatic cells. That mutation which takes place in the somatic cells affects only single individual and function of that cell is compromised while the mutations which take place in the germline cells does not affect that individual rather affects the next generation.

Many causative agents may cause mutations, i.e., ionizing radiations, drugs, toxins, X-rays, errors in the DNA replication which are not corrected. Mutations are said to be beneficial in the sense that they may lead to genetic variation and thus helps the individual in better adaptation to their environment. But may prove dangerous sometime. Its example can be given as cancer also takes place due to the mutation during DNA replication which is later not corrected by enzymes. The example of the good effect of mutation for the survival of the individual is the development of antibiotic resistance in bacteria which has become them able to survive better.

What is the Variation?

The word variation means “to differ from.” Thus, the term variation denotes the specific and distinct characteristics among different organisms or group of organisms of the same species. For example, how they are different from each other in color or eyes, the shape of body, complexion, and height. Variations may occur due to many causes, i.e., gene insertion, translocation, deletion, gene drift, gene flow, selection pressure, and environmental factors.