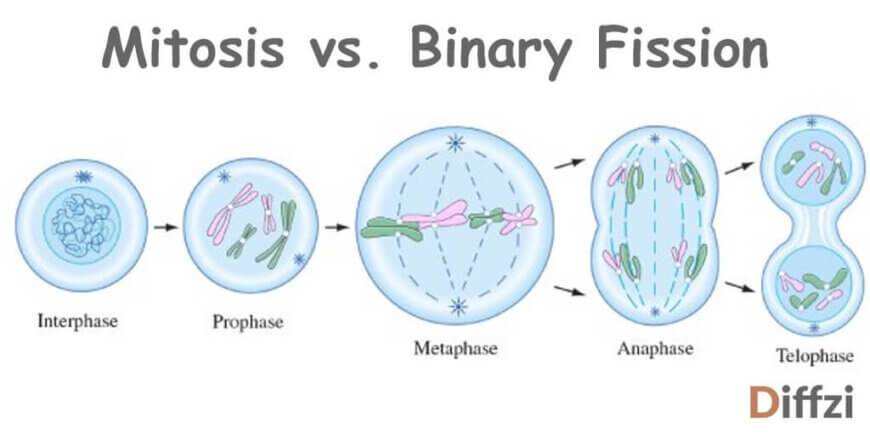 In binary fission, first the replication of genetic material occurs, and then the cytoplasmic division is carried out, a process known as cytokinesis. In mitosis, this is the sequence which is followed. First, the duplication of DNA takes place, and nucleus divides. This process is known as karyokinesis. Then the cytoplasmic division takes place which is known as cytokinesis.

What is Binary Fission?

Binary fission is a process in which a prokaryotic unicellular organism divides to form two unicellular organisms. It is a method of asexual reproduction in prokaryotic organisms. It is also carried out by some protists and eukaryotic cellular organelles. Its primary aim is to reproduce the progeny organisms. It is a simple and rapidly occurring process. Mitotic spindles are not formed, and DNA is directly attached with the plasma membrane. The duplication of DNA and separation takes place at the same time in binary fission. It is not a very reliable process like mitosis. Sometimes the progeny organisms avail an unequal number of chromosomes.

Mitosis is a kind of cell division in which a single cell undergoes division and produces two cells which are identical to each other and parent cell. It is a very complex process required various checkpoints at different stages in the form of enzymes which prevent and correct any mistake. It takes place only in eukaryotes. It is used for growth, regeneration, healing process and asexual reproduction of cells in the complex organisms. Spindle apparatus is made, and DNA is attached with spindle fibers for the division of the cell.  It is completed in different stages, i.e., prophase, metaphase, anaphase, telophase, and cytokinesis.

During prophase, the cell gets ready itself for division and replication of DNA happens. During metaphase, DNA aligns itself in the equator. During anaphase, the chromosomes are separated and during telophase one nucleus is divided into two nuclei. During cytokinesis, cytoplasm is also divided