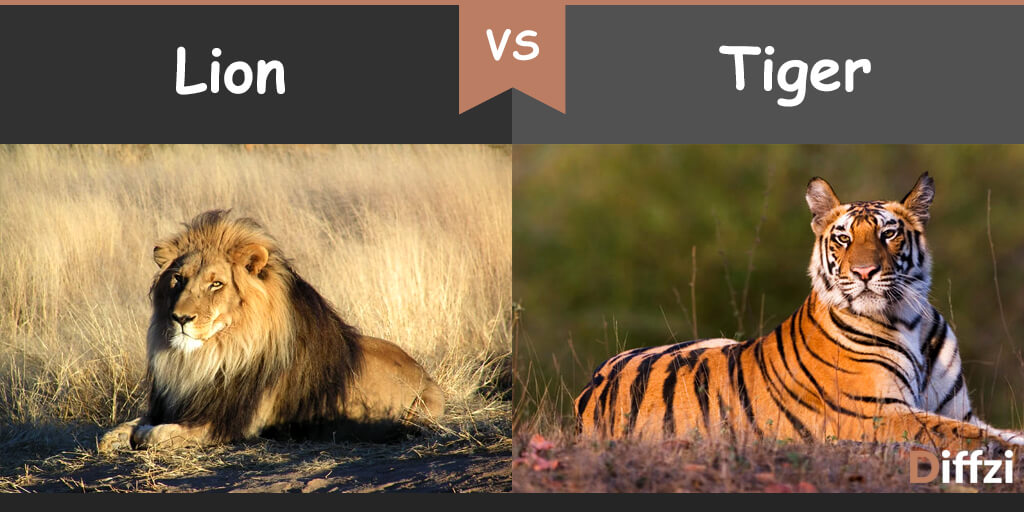 The main difference between the lion and the tiger is their appearance. Tigers have bold and black stripes across the bodies, whereas lions don’t have stripes on their bodies.

Lions and tigers belong to the same Felidae (cat) family, and they both are among the five big cats of the world, whereas the other three are jaguar, leopard and snow leopard. They are known as the furious animals of the world.

Lions mostly live in groups which are called “pride”. They don’t have stripes on their bodies, and male lions have large mane around their faces. As compared to other cats, lions are more social.

On the other hand, tigers are the largest cat in the world. They have bold and black stripes on their bodies, and they don’t have manes like other adult male lions.

A lion is the second-largest cats of the world.  Lions are famous as the king of the jungle due to their extreme power and roar, but they don’t live in the jungle, Lions mostly inhabit savanna and grassland and sometimes they inhabit the forest, shrub-land and desert. Lions roam in pride which is headed by a mature male along with other females and cubs. It is the lioness that hunts the prey and brings the prey for the family, whereas they mostly prey in groups.

Tigers are the largest felines on the earth. They are generally longer, more muscular or heavier as compared to lions. They are very aggressive and active by nature.

Tigers have orange fur with black and brown bold stripes on their bodies. They usually live alone except for cubs with the parents and hunt their prey on their own. They are carnivorous and mostly they eat large prey like deer, elephant calves, but sometimes they kill and eat people too. It happens when the tiger is old or injured and unable to catch the normal prey.

Key Differences between Lion and Tiger

However, both lions and tigers are furious and powerful animals. Lions are more social than tigers as they live in pride. They are the second-largest cats of the world and they are yellow, brown, tan or reddish. Male lions have a mane and have a deeper roar as compared to the lioness. On the other hand, tigers are the largest cats and are more muscular, heavier than the lion and more aggressive. Tigers are a solitary hunter; they live and hunt the prey on their own.