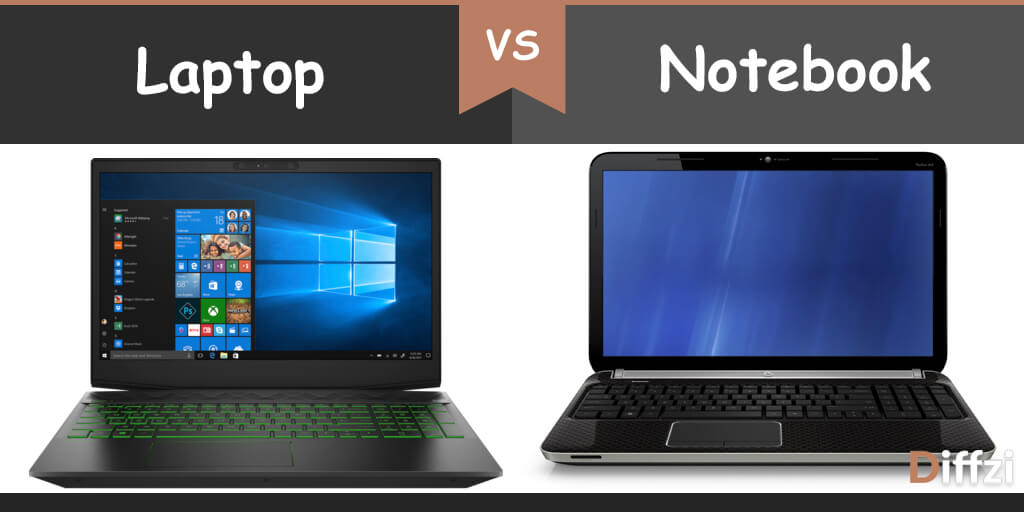 Are you going to buy a new device for yourself? And are you confused about whether to buy a laptop or notebook?

If yes, we have some information about the differences between the two devices, which will help you in choosing between notebooks and laptops.

Every year modern technology introduces a wide variety of new and inventive products like laptops, notebooks, tablets, i Pads or Android devices to the consumers. Some people believe that laptops and notebooks are almost the same devices, but there are a lot of differences between laptops and notebooks.

The main difference between the laptop and notebook is the size and weight of the device. Laptops are generally weighed almost 4 to 8 pounds, and they are about 1.5 to 2 inches thick. On the other hand, notebooks are mostly 3 to 5 pounds in weight, and they are 0.5 to 1 inch thick.

A laptop is a portable personal computer which can be easily carried to different locations. Its features include a display screen, speakers, keyboard, processor, webcams, memory, microphones or integrated modem for communication purpose. However, some latest laptops include touch-screen and integrated fan.

The first laptop was invented in 1981 by Adam Osborne, and later in 2005 the first time, the laptop sale surpassed desktop sales, which was a great change in the computer world.

The functions of the laptop are quite similar to a desktop computer and being compact, and portable laptops are ideal for the use of business people.

The laptops are light-weight and can be carried easily anywhere so they can be used in a home, office or any place as per your choice, and you can also use a laptop while travelling for meeting purposes. Some students use laptops for doing their assignments in the free-time between the two classes.

The weight and size of the screen are the two main differences between the laptops and the notebooks. The weight of a laptop is almost 4 to 8 pounds, and most of them consist of screens between 10 and 20 inches.

The laptops are more expensive as compared to notebooks, you can buy an average laptop for $500 or less, but if you want to buy the latest laptop with better features so you can buy it for almost $1000 or more.

A laptop consist of Ram between 1 and 16 GB, however, some latest models may have up to 32GB Ram. The processing power of the laptop is also very impressive and is similar to the desktop computer.

A notebook is a small shape feature computer which is a hybrid between computer and tablet. These notebooks are generally smaller than the briefcase and can be easily transported and used in different places like aeroplanes, offices, libraries, or at meetings. Notebook computers are ultra-light personal computers, which are designed to do computer work as well as entertainment purposes. They are easy to use with better battery lives, minimal graphics sub-systems, modem, or a keyboard which is just enough to be functional, and they can’t operate the CDs or DVDs.

In 1989, the first notebook computer was introduced in the market. Later it becomes famous among business people or students because of its light-weight.

Notebooks are smaller computers that are manufactured with a screen size of 15 inches or less. However, the weight of the notebook is mostly less than 5 pounds.

The ram-memory of a notebook is very small with a range between 1 and 4GB, and its processing power is also very low, but some new models may have a fast processor which is still slow as compared to laptops.

Notebooks are cheaper than laptops, they generally cost $200 or less, but some latest notebooks may cost almost $800.

Key Differences between Laptop and Notebook

However, these two terms are quite different from each other. A laptop is a portable personal computer, its functions are quite similar to desktop computers, and it is a great option for business people, whereas students also use laptops for doing their assignments and as it has large storage space, so it offers more gaming opportunities as well. On the other hand, notebooks are smaller and inexpensive computer devices that are designed for basic computing tasks like word processing, emails, or web browsing. They can be fit easily into backpacks, briefcase or in a large purse due to their smaller size.