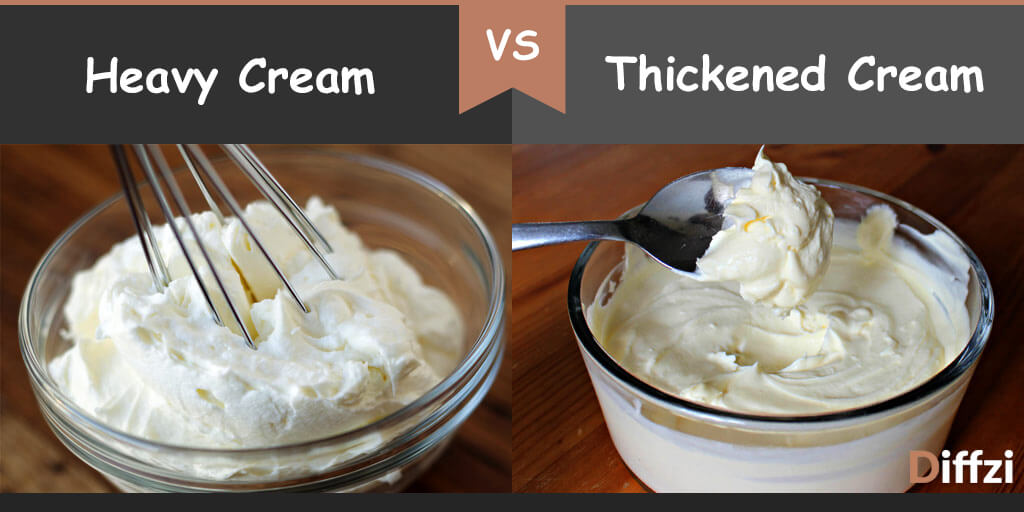 There is heavy cream, thickened cream, and whipping cream, but what is the difference between all of them? The main difference between heavy cream and thickened cream is the % of fat content. Heavy cream is also known as heavy whipping cream has the highest amount of milk fat, which is usually between 36- 40% and can go as high as 48% while thickened cream contains around 30-35% of fat but has additional ingredients such as gelatin or gum in the form of thickeners to help in maintaining the consistency of the cream.

Though virtually heavy cream and thickened both are the same but they are not. Types of cream depend entirely on the milk fat content and any addition to the cream will lower the % of the fat content.

Thickened cream is a bit more thicker and more stable than regular cream, which makes it ideal for use in cooking and baking etc. It is often used to make sauces, soups, and desserts, and can also be whipped and used as a topping for cakes and other baked goods. Some people also use it as a substitute for milk or half-and-half in coffee or tea.

What is Heavy Cream?

“A cream that has a lot of butter and a smooth, satiny texture with the highest fat within its constituents as compared to the other dairy products.”

Heavy cream is a staple ingredient in many cuisines from Italian American Fettuccine Alfredo to soup and broth. It is made from the high-fat part of fresh milk when it is left to stand a heavy cream rises to the top and can be scraped off.

It was originated in North America which is the thick part of the milk that rises to the top of the surface of the container in which the milk is kept due to its high-fat content and can easily be skimmed out of the box by churning milk in a centrifuge.

It is a cream that whips well and holds its shape which makes it easier for the cream for pastry fillings and used as piping for desserts like cookies and cakes. Heavy cream is a rich and creamy dairy product which enhances the richness and creaminess of dishes as it contains the 36 – 40% of milk fat that is responsible for creating a silky consistency in many recipes. Even though it may not be the healthiest ingredient, heavy cream is an essential component of many recipes such as,

Heavy cream is gentler when you move a spoon through it, to make it harder keep it in the fridge for around 1 – 2 hour. When it is hard, start beating it, the more you agitate the harder it will be to move the spoon at this point you can add sugar to build the volume significantly more.

What is Thickened Cream?

“A cream with a fat content up to 30 – 35% that contains thickening agents to increase the consistency and stability is used for cooking, pouring over foods, and whipping”.

Thickened cream is also known as pouring cream that has at least 18% of milk within its constituents that becomes pasteurised and homogenised regularly. It is mostly used as a topping over cakes and pastries as it requires greater time to cook so it is mostly used in confectionery when the recipe calls for whipped cream or whipping.

Heavy cream and thickened cream looks very similar but they are not the same. Thickened cream is originated in Australia that contains gelatin, gum, and other thickening agents to make it easier for whipping and also prevent it from separating or curdling.

Thickened cream does not contain more quantity of milk within it and has a smoother surface that can be added in some dishes such as,

Heavy cream is milder when you move a spoon through it and unlike heavy cream, when you begin to whip it, it will turn out to be smoother. The drawback of thickened cream is that it requires greater time to cook and mix but it is less expensive than heavy cream.