The difference between Habitat and Niche is that Habitat refers to the specific place or locality where an organism lives.While niche is the role played by a specie in its habitat. 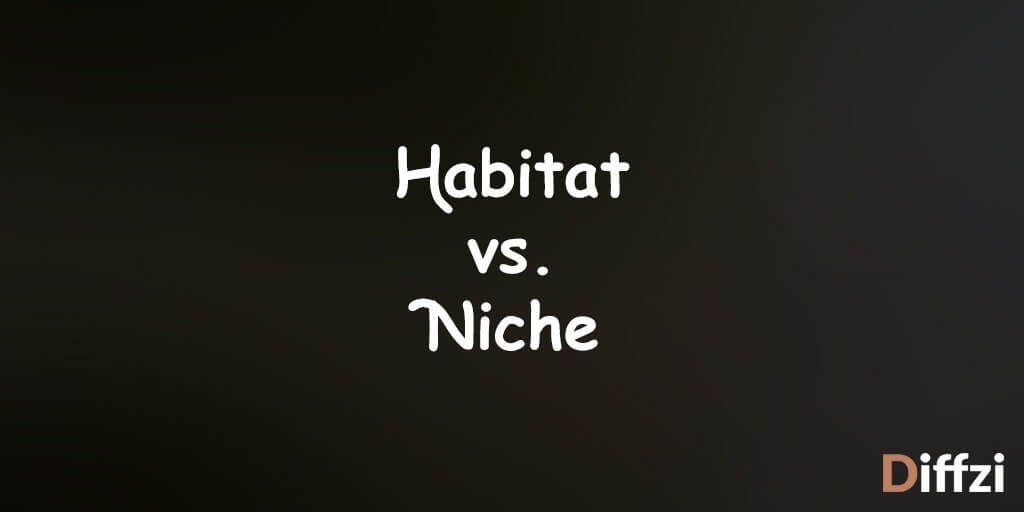 Habitat is basically the “home” of an organism. Habitat refers to all of the biotic and abiotic factors in that area where an organism lives. For example, a number of plants and animal species live in forest habitat.  The niche includes same factors as the habitat (all the physical , chemical and biological factors that a specie requires for its living) but it also includes animal’s behaviours, e.g. type of food species eat , the temperature it can tolerate, how it communicates others , at which time of day it is active.

In the study of niche, the focus is put on the strategy that an organism adopts while living in an environment having limited resources. The niche and habitat may have some common characteristics, but they are the things which are actually totally different from each other so they should be defined and identified separately.

A Habitat may have a number of species living in it. It may contain a single niche or multiple niches. It contains a number of environmental variables, e.g. water, air, food. On the other hand , a niche has no further components. Niche only supports a single specie. One specie occupies only a single niche. Otherwise, they will compete for each other for food and shelter, and ultimately one specie will be dominant while other will end up. While a specie can occupy different habitats at different stages of its life. Habitat may also contain more than one species. Niche has a specific set of environmental regimens in which a specie has to survive. Thus niche is the job played by specie in this limiting environmental conditions.

Some species have specific habitats. They cannot live outside their particular habitat. While some species have wider choices. For example, certain fishes live only in fresh water while others, e.g. Hilsa can live in both fresh water and saline water.

It can be said that habitat reflects the living place of an organism. While niche reflects the biotic and abiotic association of the specie with the environment in terms of diet , reproduction and other activity. A habitat includes five things, i.e. food , water, shelter , air and the place where an organism lives. While a niche contains all these components plus the role played by the organism in this habitat for its survival.

Contents: Difference between Habitat and Niche

What is a habitat?

Habitat is referred to the specific place where an organism lives. All the biotic and abiotic factors are included in the habitat of a specie where it resides. Habitat can also be  divided into parts which have their specific properties and give protection to different types of organisms. They are termed as micro habitats. For example, the muddy bottom and surface water of a pond, tree canopy, under a stone, a pile of logs and forest floor are micro habitats. There are 5 different types of habitat.

What is a niche?

Niche is the role played by specie in its habitat. It includes all the physical, chemical and biological factors that a specie requires for its living ( same as the habitat ) but it also includes the behaviour of the animal that is how he lives , which type of food he eats , at which time of day he becomes active etc. There are 6 different types of niche.

Example of niche can be given as the big cat prey on the large hoofed animal, e.g. zebras. They will also scavenge smaller prey. The hunting for their survival is the example of niche. Another example of a niche is ¸bacteria eat dead animals preventing them being piled up while adding nitrogen  in the soil.

Human habitat can be defined as the place of residence of a human being. For example, a house is a human habitat where human beings sleep , eat and perform their routine activities. The fundamental niche of human beings is attributed to their biological tolerance to the extreme of environmental conditions. But unlike other species, humans have the ability to utilize technology to mitigate these extreme environmental conditions to make their life easy.

But this use of extreme technology by human beings require a large and large and continual subside of energy , food and other resources.

Fundamental niche can be defined as the set of entire conditions under which an animal can survive and reproduce itself.

Realized niche can be defined as the set of conditions actually used by animals after interaction with other species.

Niche can also be classified as

It is considered as the physical space occupied by an animal.

It can be described based on the food level of the organism.

It is quite complex and explained using fundamental and realized niches.

Key Differences between Habitat and Niche