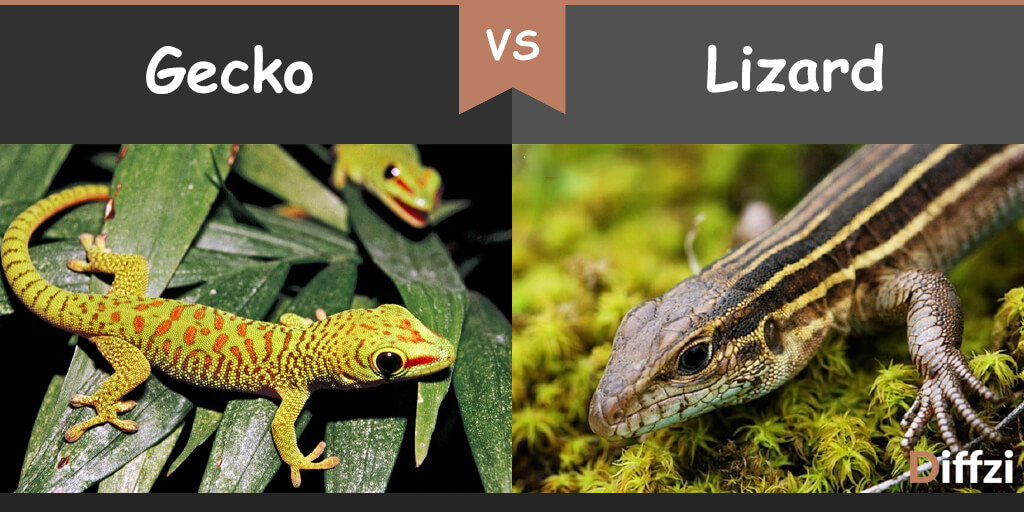 However, lizards and geckos share the same classification to some extent, but the main difference between them is the suborder. The geckos belong to the Gekkota infra order within the Lacertilia suborder, which are mostly found in warm climate throughout the word.

On the other hand, lizards are the reptiles that belong to the order Squamata, with over 6000 species, found across all continents except Antarctica and other ocean islands.

Both Lizards and geckos are cold-blooded animals that have four legs and can change color and blend well in their surroundings.

Geckos are the lizards that belong to the Gekkota infra order and mostly they are found in warm climate throughout the world. They can pop-off their tails to distract the predator when the predator is distracted with the tail, the geckos run away and this process is called autotomy. Their tails can also grow back, but there are some other types of lizards that cannot re-grow their tails.

Geckos don’t have eyelids unlike other lizards, but they lick their eyelids to keep them clean and moist. They also can climb the vertical surface as they have specialized pads on their toes, which help them in climbing flat and vertical surfaces like walls or windows. However, the average lifespan of gecko is five to seven years.

Geckos are mostly nocturnal, unlike lizards. Nocturnal species of geckos have very good night vision; their color vision is almost 350 times more sensitive than human color vision. Moreover, they also have a multifocal optical system that enables them to create a sharp image for two different depths.

The Kawekaweau, the specie is only found in the basement of a museum in Marseille, France. However, this gecko was 24 in (60 cm) long in size. Geckos are found throughout the warm areas of the world except for Antarctica. Geckos are normally grey and brown color, a genus made of the day geckos of Madagascar, which is bright green and usually active in the daytime.

The banded gecko is the widespread North American species, and it grows to 15 cm or 6 inches long and it is pinkish to yellow in color with dark bands. The Tokay gecko, the largest species, found in Southeast Asia is 25 to 35 cm in length and it is grey with red and white spots and bands.

Lizards are reptiles that belong to the order Squamata and are found all over the world. Lizards have four legs and are cold-blooded. They are dry and scaly skin reptiles which are distinguished from snakes as they have legs, external ears and movable eyelids.

Lizards are a common group of Squamata reptiles which includes more than 6000 different species. The group is paraphyletic, it does not include snakes which also belong to Squamata and they may vary in size from chameleons and geckos only a few cms long to the 3 m long dragon.

Most lizards are four-footed reptiles and they run with a strong side to side motion. Some are legless and consists of a long snake-like body. Some other species are iguanas, chameleons, geckos, monitors and skinks.

Lizards mostly eat fruits and other vegetation, small insects, frog and mice with their long and sticky tongues. Lizards as pets like iguanas, bearded dragons, monitor lizards mostly feed on live worms and crickets. Some are predators who eat mammals, birds and other reptiles, and some are vegetarians who eat vegetable, fruits and flowers.

Lizards mostly lay eggs that mean they are oviparous. Some species give birth after they have hatched the eggs inside the body. And if they are egg-laying the lizards will keep the eggs in their nests. They are capable of parthenogenesis in Squamata, that is asexual reproduction and it is found in almost 50 species.

However, geckos and lizards are most similar and confusing reptiles in the animal kingdom. Lizards are cold-blooded animals which have a small head, a long body, a tail and four legs. They are found all over the world. On the other hand, geckos are mostly found in warm climate areas throughout the world. Geckos are mostly nocturnal as they hunt the insets at night and sleep during the day.