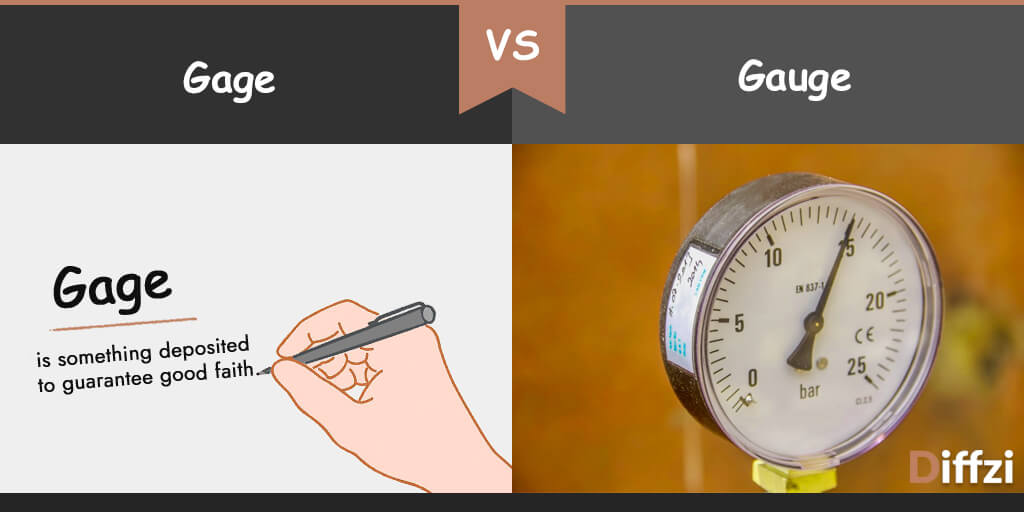 Today we are going to learn about two words that have the same pronunciations, but they have different meanings in a sentence and are called homophones.

Today, the gage is a word that you will rarely hear from someone as it comes under the category of obsolete words. However, it is sometimes used to refer to some valuable thing that is deposited as a pledge or security. For example, “I have kept my house as a gage in a bank”. It is important to note that the usage of gage is not only limited to an item or object deposited as a surety, but it can also be used to refer to something that can be thrown down to challenge someone for a fight. For example, “The opponent throws up his gage in a fight”.

It is a device or a tool for measuring the physical quantity. For example, an air gauge can measure the pressure of your car tires.

Key Differences between Gage and Gauge

Gage and gauge are two confusing words of English Language that may sound the same but have entirely different meanings. In writing, one can be 99% sure that in which context the word is used. However, while speaking, there can be misinterpretation because both words have the same pronunciation. To clear the entire confusion, one must learn the meanings of both words. Gage is a word that has two meanings; one is an object that is deposited as a guarantee of good faith, and other is something such gloves or sword that is thrown out to show a willingness to enter into a battle. Gauge is a word that is used for an instrument or a device that displays the measurement of a system by the use of a needle or pointer that moves along a calibrated scale.