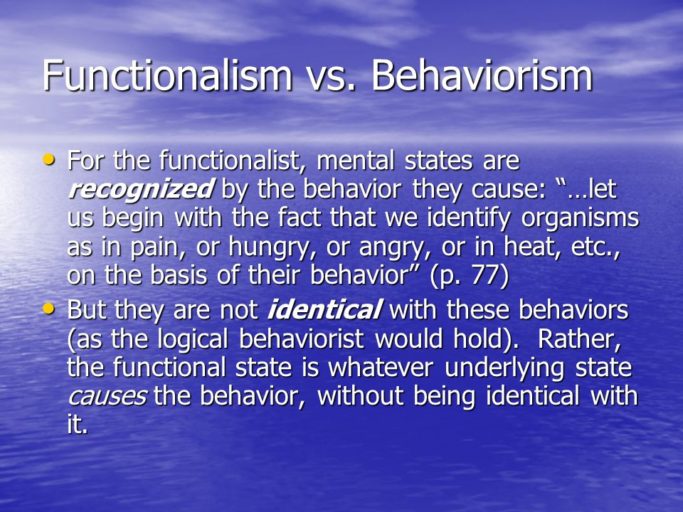 From the term of the Functionalism, we generally mean that it is one of the earlier schools of thought in which the general nature of the people is to stress on the fact that the main focus of the subject of psychology should be based on the functioning of the human mind. The Behaviorists, on the other side, are the people who claimed that this was rather a useless to check the functioning of the human mind in the subject of psychology. The scholars of this school of thought are in the favor of the the necessity of studying the human behavior for the prime goal of comprehending the human mind. In other words, you can say that the Functionalists are those researchers who believe that the mind and mental processes are extremely significant in creation of an impact on the human behavior while the scholars belong to the concept of the Behaviorism stress the importance of the human behavior for the similar motive. As compared to the Functionalism theory, the concepts of the Behaviorism come in front of the whole world later on and thus, the ideology of the Functionalism is conventional.

The concept of the Behaviorism come into existence in the era of 1920s in the field of psychology and the John B. Watson, Ivan Pavlov, and B.F Skinner are known to be the pioneer of this ideology. The group of scholar favors this psychology theory is against the concept of the functionalism and they emphasizes on highlighting the significance of the external behavior of human beings. After study the concept of the Behaviorism, you will come to know that the study of the human mind is futile and should never use seeing that it is non observable phenomenon. Unlike the mind processes shown by the Functionalists, The Behaviorism further pointed out that the humans actions are just a response to the external stimuli and they are not based on the mind progressions. The theory of the Behaviorism has some key assumptions for support. These assumptions contain some specific ideologies consisting of the determinism, experimentalism, hopefulness, anti-mentalist, and the idea of nurture against the nature. The psychologiest who are in the favor of Behaviorism utilize the laboratory settings and various animals for experimentation such as the dogs, pigeons, rats, and lots of others. The disciple of psychology contains lots of contribution from the behaviorists. Some of the behaviorists theories like classical conditioning, operant conditioning and the social learning have provided insight to the psychology as an academic discipline, as well as, for the purpose of performing the counseling psychology at the same time, resulting in generating the possibility of employing the theoretical knowledge for practical motives in the situations when the psychiatrists assist their clients.

Key Differences between Functionalism and Behaviorism