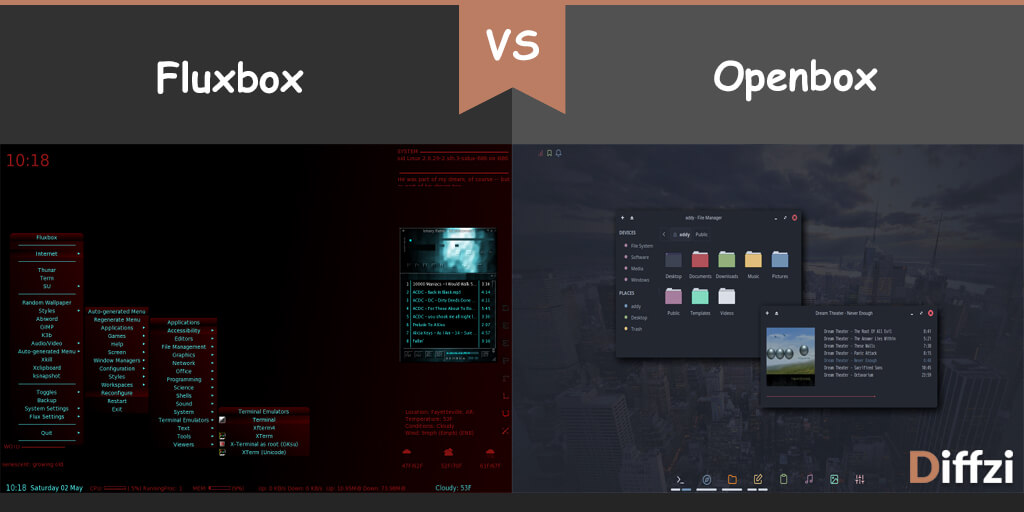 Both fluxbox and openbox are based off the minimal window manager, which is more famous for how it looks ‘under the hood’ than it does in use. They both vary according to the configuration files they use. Fluxbox WM and Openbox WM, both can use the xorg-system-core, with NO desktop environment. Much like what Crunchbang and Archbang have done. Fluxbox uses its own toolbar Whereas in openbox you can use one of the many others such as tint, visibility, fbpanel, etc. Fluxbox themes can have pictures as background (buttons for example). It’s somewhat more esthetic than Openbox..

Fluxbox uses a custom configuration file syntax. Fluxbox is a window manager for X that was based on the Blackbox 0.61.1 code. It is very light on resources and easy to handle but yet full of features. The  stable release of fluxbox was on February 8, 2002. Fluxbox is able to use tabs.

Fluxbox is often used by advanced users who want a more streamlined and customizable interface than what is provided by a more fully-featured desktop environment. It is also popular with users who prefer a lightweight and fast window manager that uses fewer system resources than more feature-rich alternatives. Fluxbox is available for a wide range of operating systems, including Linux, BSD, and Solaris, and can be easily installed and configured to suit the user’s needs.

Openbox uses XML. Openbox is a highly configurable, next generation window manager with extensive standards support. openbox was initially released on 18 September 2002. Openbox seems to be growing in popularity, with more Linux OS-distro systems using Ob as the default WM. Key Differences between Fluxbox and Openbox