The difference between an enzyme and hormone is that enzyme is protein in nature and it acts as a catalyst that increases the rate of different reaction taking place in the body hormones are chemical messengers which convey signals to the cells for performing different functions. 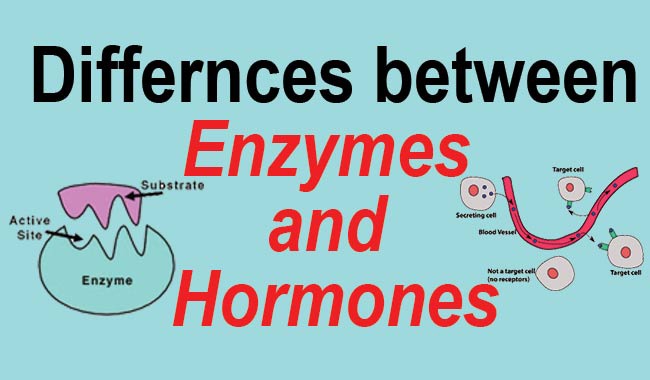 Hormones play the key role in body growth and development, but enzymes do not perform the role for the growth of the body. Enzymes act at the site where they are produced, but hormones act at a distant site from where they are released. The function of enzymes is affected by temperature and pH while hormones are not temperature and pH specific. A specific enzyme acts on a specific substrate while hormones are not substrate specific.

Enzymes are not affected by age while the generation and function of hormones alter with age like pre-puberty, puberty, and menopause.

There are fewer chances of occurrence of disease due to the deficiency of an enzyme while diseases due to hormonal disorders are very common.

Examples of enzymes are hydrolases, Transferases, and Oxidoreductases. While examples of hormones are insulin, glucagon and thyroid hormone.

Enzymes are specific types of proteins present in the body which act as a catalyst. The catalyst is the substances which speed up a chemical reaction. Enzymes are the biocatalyst in the sense that they act within the living things and affect the biological functions. Enzymes are synthesized by exocrine glands which release their products within the ducts. Mostly, an enzyme act at the same place where it is released. They have high molecular weight because of the presence of heavy polypeptide chains. Due to their heavyweight, they cannot cross the cell membrane. Deficiency of an enzyme in the body which is mandatory for a specific function can result in any diseased condition, but these abnormalities are rare. Enzymes can be used again and again after their use of first time in any reaction. A specific enzyme binds only with a specific substrate at the receptor site. The binding of the enzyme with its receptor site can be explained with a lock, and key model as a specific open a specific lock, same a specific enzyme binds with a specific receptor site. The function of the enzyme alters with the change of temperature and pH. The temperature and pH at which an enzyme works most efficiently are called optimum temperature and pH for that enzyme.

Examples of enzymes are oxidoreductases, transferases, and peroxidases.

Hormones are the chemical messengers produced in the body which convey a message to the cells. Hormones are low molecular chemical substances, and that is the reason they can cross the biological membranes easily. Hormones are produced by endocrine glands which release their products in the blood. Hormones act the site which is far away from the site of their release and production. The function of hormones alters with age. For example, at puberty, the production of Testosterone and estrogen increases in the males and females respectively. Hormones are not substrate specific, and their function is not affected by the change in temperature and pH. Overproduction or underproduction of a hormone can produce different diseases in the body. For example, gigantism occurs due to overproduction of growth hormone. Hyperthyroidism occurs due to the overproduction of thyroid hormone. Short stature results when the growth hormone is not produced in the required quantity. Examples of hormones are growth hormone, progesterone, estrogen,

Hormones and enzymes are the substances produced in our body and affect the metabolism. It is mandatory to know the difference between both of them. In the above article, we learned the clear differences between enzymes and hormones.