Medicine and treatment have improved over the past few decades, and that is because many instruments and processes have introduced that have helped doctors to cure patients. Endoscopy and Gastroscopy are two such processes that have contributed their bit and use the same instrument. The main difference between them can be that the process by which the inside examination of the human body occurs, is known as endoscopy if the action I performed with the help of an endoscope. Gastroscopy is a procedure in which a thin and flexible tube is inserted into the human body and is used to look at the specific parts that include gullet, stomach and some areas of the intestine. 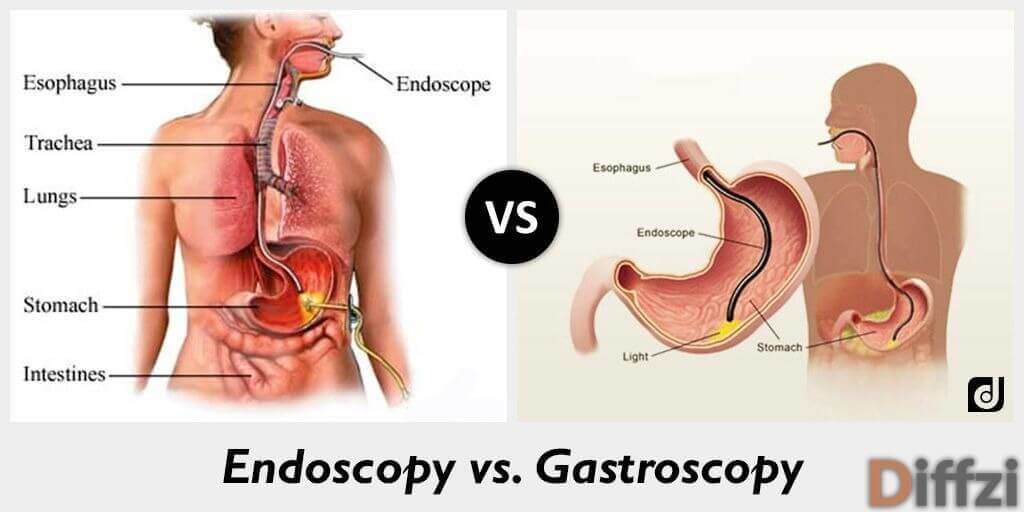 Contents: Difference between Endoscopy and Gastroscopy

In simple words, if we try to explain what endoscopy is we will have to look at the instrument that used for this process. This device is known as an endoscope and is something that helps in examining the internal organs of a human being. Hence, the process that shows the inside of the human body examined is known as endoscopy if the action performed with the help of an endoscope. This tube is a long and thin tube that can be turned according to the requirement and that is because it is flexible. It helps in taking the images of the organ that is being examined and then the doctor can analyze it according to the pictures and proper treatment is made on that basis. There are different ways in which an endoscopy carried out. The main one is the insertion of this instrument from a natural opening such as your mouth, bottom or even your throat. There are other ways to perform this action as well will include the insertion with the help of a small cut that is made of the human body with the support of a keyhole, whenever the surgery is being carried out with proper care and precautions. The main reason of its utilization is that it helps in investigating the unusual symptoms that a person is feeling. It helps in carrying out strict surgery procedures as the surgeon will be able to see all that is happening inside the body. It also leads to many other procedures such as bioscopy in that the same instrument is used to remove a small part of human tissue from the body to have more analysis done on it.

Explaining the term Gastroscopy will not need to much detail from the beginning since the instrument discussed above is used to perform this tasks as well. Gastroscopy is, therefore, a procedure that has a thin and flexible tube is inserted into the human body and is used to look at the specific parts that include gullet, stomach and some areas of the intestine. This process is sometimes also known as upper gastrointestinal endoscopy since all these parts which have mentioned above are the ones checked with this. The endoscope is the device that is used to perform this task and has camera present at one end that is the ability to flash as well. Then it captures pictures and is attached to the monitor, it then shows all the images taken, this helps in making sure all the structure checked at that very time, and the tube does not have to be inserted several times into the body. The primary use of this process include the checking of the issue that includes difficulty in swallowing or pain in the stomach, this can be dangerous in some cases and can lead to something serious therefore it is better to have a proper checkup. People can also go through this process to check if they have some kind of virus or ulcer in this bodies and they can also treat for problems such as bleeding and blockage or even growth that can be cancerous. There are two main types of processes that are known as a diagnostic gastroscopy, and the other one is called therapeutic gastroscopy, the first one is used to diagnose a problem whereas the second one is used to cure a problem. In short, it usually becomes a synonym for endoscopy since the whole process of going through the examination stays same.

Key Differences between Endoscopy and Gastroscopy