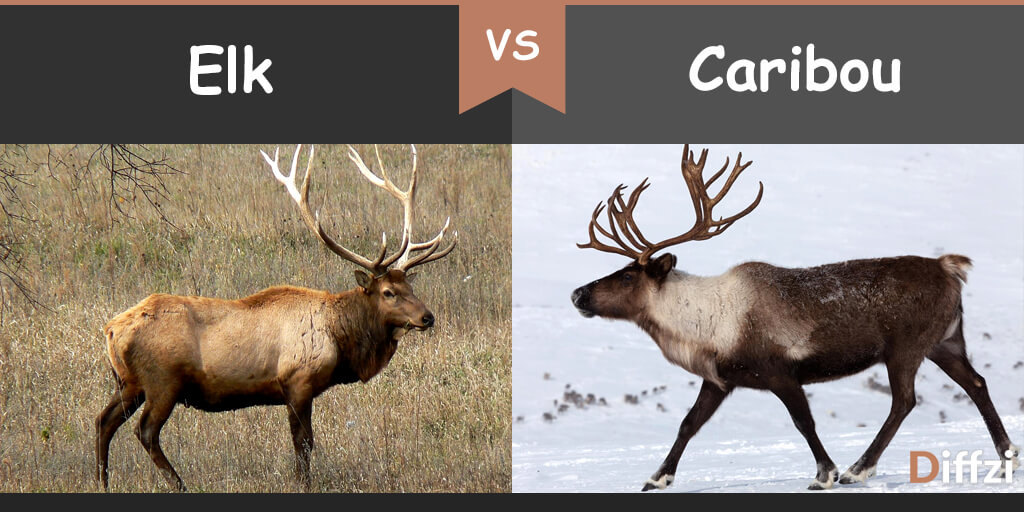 Elk and Caribou both are ruminant mammals that belong to the same family Cervidae. Besides elk and caribou, the family Cervidae also consists of deer and moose species. One interesting fact about the species of this class is, they all look quite similar, but in reality, they are entirely different species.

Besides the main difference, there are many other several differences between them mentioned below.

The Elk is also called “wapiti”, a Native American word that means “white rump”. Elk varies in color from light tan in the summer to dark brown in the winter.

The elk is among the largest deer species weighing between 325 – 1100 pounds.  Elks were once found and lived across the mountainous forests in North America and East Asia only.  But later on, they had been introduced into new habitats such as Argentina, Australia, and New Zealand.

Elks mainly prefer to stay in both low land forest and forest-mountain habitats, but they can also be seen near lakes, bush lands, and marshes. Male elks are known as bulls have antlers and weigh up to two times or more than females which are also known as cows.

Elks are very social animals that live in groups of up to 400 individuals, called gangs. For elks, the mating season starts in September when mature bulls compete for the attentions of cows by making high pitched sounds known as bugles. The cows are attracted to those bulls that bugle the most frequent and have the loudest pitch.  The gestation period of cows is 240 to 262 days after which they give birth to one or two calves weigh between 33 – 35 lb. The antlers of the elk are one of the fastest-growing bone that grows as per as 1 inch per day during the summer. Male elks shed their set of antlers every March and grow a new set in every May weighing up to 40 pounds. The new antlers are fully covered with velvet which keeps them insulated during the cold and snowy season.

Like other members of the Cervidae family, elks are also herbivorous, and their diet mainly includes grasses, shrubs, leaves, and trees. Elks are usually held in captivity for hunting and velvet collection. Velvet that is shed from male elk antlers is collected and used in medicines. Elk hides have been used for hundreds of years for the making of warm clothes and footwear. These days, antlers are also used as decorative pieces, but elk skin shoes, gloves, belts are more commonly used.

The Caribou is also known as “Reindeer” when domesticated. They are mainly found across the Arctic tundra and boreal forests regions of North America, Northern Europe, Alaska, Greenland, and Asia. Caribous vary considerably in size and color and weigh about 355 to 400lb.  Unlike Elks, both males and females of Caribous have antlers that are much larger than elk’s antlers. In the Scandinavian populations, old male’s Caribous fall off in December, young male’s fall off in the early Spring, and female’s fall off in the summer.

The nose of the caribou is entirely covered with short hair that ultimately increases the surface area within the nostrils and helps in keeping the incoming cold air warmed.  They are seasonal breeders who usually do mating in early September. Male caribous battle with each other for access to females. Two male will lock each other’s antlers and with all their strength, tries to push each other away. The most powerful male wins and can collect as many as 15-20 females for mating.

Caribous primarily love to eat lichens and mosses and occasionally eat grasses and shrubs. Some caribous are dark grey and some are dark brown with white patches underneath the tail, on neck, forehead, abdomen, and edges around the feet. The whole body is covered with a coat that has two layers of fur. One is a dense woolly undercoat while other is a long-haired overcoat consisting of hollow air-filled hairs enabling them to survive in harsh winter climates.

Like Elks, Caribous are also social animals that travel in a group of hundreds called as a herd. Few of the commercial uses of caribous are meat, hides, antlers, milk, and transportation by several Arctic citizens.

Key Differences between Elk and Caribou

Both elk and caribou belong to the Deer family and hence are quite similar to each other, but there are numerous visible differences between them. They belong to different species; have different body color, size, and shape. Moreover, they both are found in different countries.