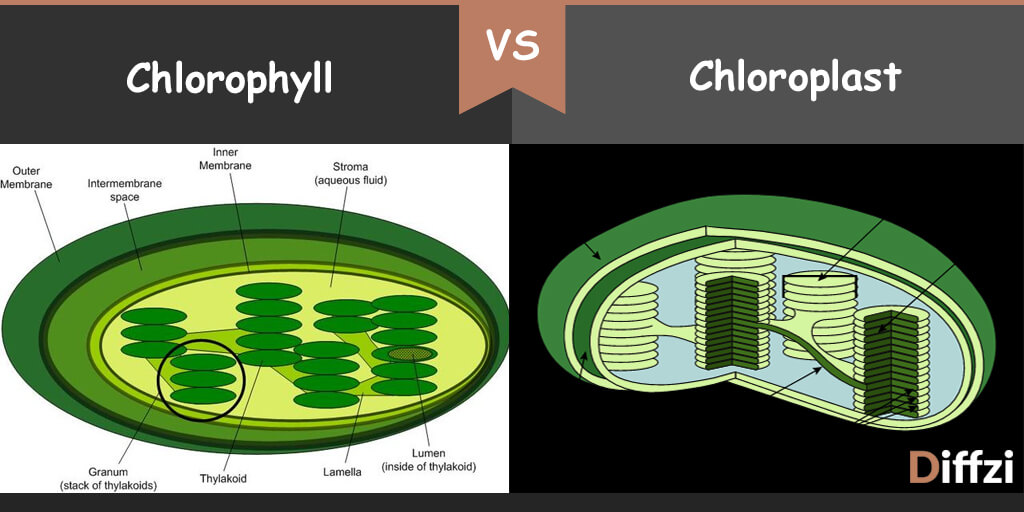 Chlorophyll is found in the mesophyll cells of the leaves, whereas the chloroplast is found in the dense fluid part of the plant’s cells. Besides photosynthesis, chloroplasts also perform many other functions, such as a light reaction and carbon assimilation reaction. These processes also belong to photosynthesis, so we can say that the whole process of photosynthesis takes place in the chloroplasts. In contrast, chlorophyll plays a role to reflect green color and absorbing red and blue wavelength light. Chlorophyll is the powerhouse of the cell, which is responsible for ATP synthesis and other reactions.

Chlorophyll is a vital plant molecule present in the chloroplast and performs a role in the mixing and arranging of the plant’s food in the process of photosynthesis. Its structure has a similarity with that of the heme group of hemoglobin and cytochrome and is derived from protoporphyrin, which has a polycyclic, plana tetrapyrrole ring.

Chlorophyll absorbs light mostly in the blue and red wavelength portion of the electromagnetic spectrum. Hence it reflects green color. This green color traps light energy from the sun, which combines with carbon dioxide and water to form sugars. This is the process of preparation of food in photosynthesis. It also helps in gaining energy for the plant’s growth. This is the reason that chlorophyll is referred to as the powerhouse of the cell, just like mitochondria, as it is responsible for the production of ATP. It is also called light-absorbing pigment or photoreceptor.

Photosynthesis occurs when water from the roots of the plant, air from the stomata of the plant and sunlight from the chlorophyll merge and mix to form food. All of these materials are converted through a chemical process and result in the production of chemical energy. Chlorophyll takes sunlight and turns it into chemical energy (carbohydrates) by using carbon dioxide and water. Carbohydrates produced by photosynthesis are used for the growth and development of plants. Chlorophyll and the whole photosynthesis process are encased inside the chloroplast.

Chloroplasts are bounded by the double membranes, outer membrane, and inner membrane. The outer layer is the origin of the eukaryotic cells and is permeable to the small molecules and ions, whereas the inner membrane encloses the internal compartment. The fluid inside this double membrane is called the stroma. The chloroplast is the main site for the process of photosynthesis and chlorophyll, which helps in this process, which is present in the layers of the chloroplast.

The chloroplast compartment contains floating, flattened tiny membranes surrounded by vesicles or sacs called thylakoids. These are arranged in a group called a granum. Numerous grana are present in each chloroplast and interconnected by stromal lamellae. These thylakoid membranes are the site of light reaction and ATP synthesis. The lipids present in the thylakoid membrane contain 80% uncharged mono and di galactosyl diacylglycerol and about 10% are phospholipids.

The aqueous phase of the inner membrane, the stroma, has most of the enzymes required for carbon assimilation. So, the thylakoid membrane present in the chloroplast is the site for ATP synthesis and light reactions. This ATP is used to store trapped energy in the form of carbon-carbon bonds of carbohydrates.

The chloroplast is also found in the bacteria; it divides by the process of binary fission as it occurs in the bacteria. It is considered a semi-autonomous structure and contains 70S ribosomes.

Key Differences between Chlorophyll and Chloroplast

Key Similarities between Chlorophyll vs Chloroplast

In conclusion, the chloroplast is a vital plant structure and the site of photosynthesis, which converts solar energy into chemical energy or food. The chloroplast has chlorophyll within its thylakoid membranes, which absorbs light energy and gives chloroplasts its green color.