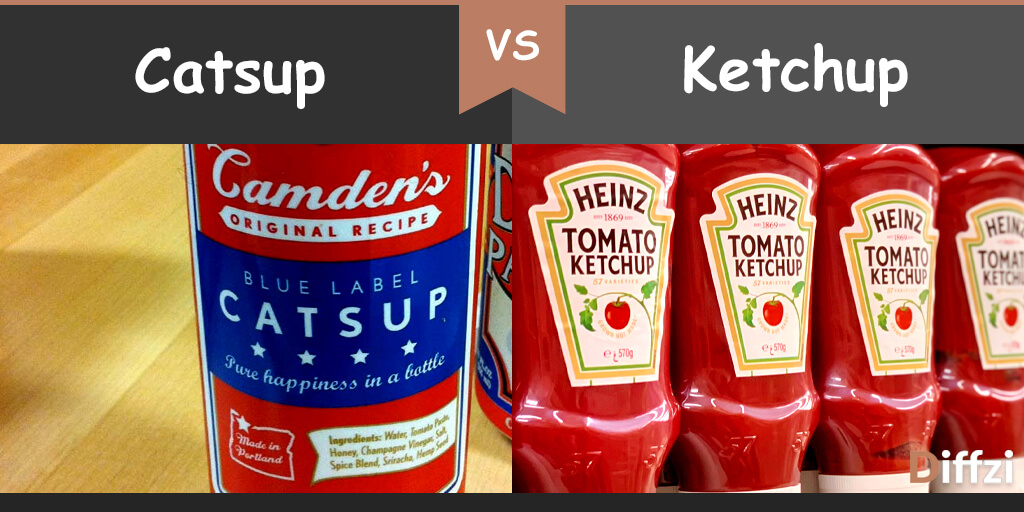 Nowadays, ketchup is considered a necessary ingredient in the kitchen cabinet along with salt and pepper.
The main difference between ketchup and catsup is their spelling. These two terms are used for a tomato-based condiment; catsup is the older word that is used for ketchup whereas ketchup is the most commonly used condiment nowadays.

Catsup is a tomato-based sauce that is used as a condiment whereas Ketchup is a sweet and tangy paste that is made from tomatoes, sugar and vinegar with some spices. Heinz, the American brand, uses the spelling “ketchup”, which is the main reason for the popularity of this spelling.

Catsup is the oldest spelling of the sauce made from mushrooms, walnuts, tomatoes and used as a condiment. It is less commonly used a spell of ketchup refers to a condiment made from tomatoes, vinegar and sugar.

The oldest spelling was catchup which was introduced in 1690, then came to the word ketchup in 1711, and lastly, the term catsup was introduced in 1730. In the beginning, the Heinz Company used the word catsup for their product but later changed it to the word ketchup in the 1880s, and it became most popular due to its commercially bottled ketchup. Due to their overwhelming success, all manufacturers started producing ketchup and branding them with different names.

Ketchup is a condiment that is made from tomatoes, sugar, vinegar and other spices. The spices may include onions, allspice, cloves, cumin, garlic and mustard and sometimes include cinnamon or ginger. It has a sweet and tangy taste.

In the beginning, unripe tomatoes were used which required the addition of sodium benzoate to prevent it from getting rotten and loss of flavor, but later in the 1900s, the food and drug administration banned the use of this preservative, then Heinz started making their ketchup by using ripe tomatoes which contain the natural preservative pectin, sugar and vinegar. The ketchup becomes thicker due to the increasing amount of pectin as compare to the previous watery version. Ketchup is used as a savor with various food items which are served hot such as burgers, chips, grilled meat, etc. it can also be served with sandwiches and for salad dressings.

The word ketchup is an American English word; it is mostly served cold and used as a savor.

However, both terms Ketchup and Catsup are used for the same tomato sauce which is made from mushrooms, tomatoes, walnuts etc. Catsup is the older version of ketchup whereas the ketchup is  very popular everywhere. There is no difference between both terms; these are just different spellings for the same thing.