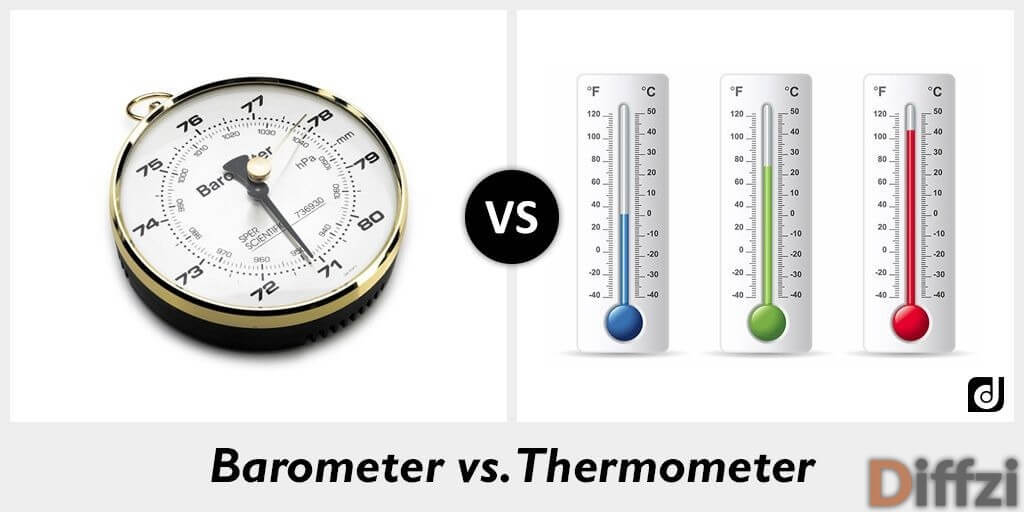 Both are conventional instruments which have been used for a long time to measure different things, and that is the main difference between them. A Barometer is used to measure the atmospheric pressure, they are used to find out the height of the land about the nearest sea level and helps in predicting the weather. A thermometer, on the other hand, is an instrument which is used to measure the temperature.

It is an instrument which is used to measure the atmospheric pressure, they are used to find out the height of the land about the nearest sea level and helps in predicting the weather. There are two different types of barometers which are present, the first one is the aneroid and the second one is based on mercury. The word itself has been taken from the Greek language, Baros, which means weight, it was first picked up by Robert Boyle in the 17th century. It is used in different ways, but the most common one is keeping it as a place without moving it and then measuring the changes in the air pressure which are caused by the weather. They can be based on water or mercury depending on the use. Water based ones consist of a glass container with a sealed body and have water that is filled up to the half level. There is a connection between the lower and upper surface which then measure the degree of water when it rises due to the external pressures. The mercury-based one is similar to the thermometer and works in a simple manner, once placed in the atmosphere the level of mercury increases and decreases depending on the changes that are taking place. They are not used to measure the long term temperature of the air but are mostly used for short-term changes that are happening around you. It is preferred by aircraft which need to know the sudden changes taking place around them, they are also used for underwater purposes and keep track of the air tank when a person is under the sea.

This is perhaps the most common instrument about which even an average person who suffers from fever and illness would know. Elaborating more on the definition, it is a tool which is used to measure the temperature. It has two important components which help in the working. The first one is the temperature sensor, which is usually mercury and is the most common. The second one is the outer body on which temperature range is shown, this is to convert the main internal actions in the form of a physical measurement. Whenever a temperature has changed the level of mercury increases or decreases. For a human body it takes around one minute to measure the total change, the device can be placed in the mouth, under the armpit or between the thighs to get the proper reading. There are different units from which it can be calculated, and the most common ones include Kelvin, Celsius, and Fahrenheit. Most of the thermometers are in the Celsius while for calculations, Kelvin is used. There are different principles under which the calculations are made, the most famous one is the thermal expansion, the other ones are the pressure changes which results in heating and cooling. It is one of the oldest devices in a way that most of the principles were known to the Greek philosophers who did not know how to create a device but had all the theoretical analysis available. It was originally just a thermoscope, but later in the 18th century, readings were added which were standardized later in the coming years.

Key Differences between Barometer and Thermometer