Pork meat is the most delicious, flavorful and mouth-watering meat you can ever have. Curing extends the shelf life of pork products. Let us talk about the meat curing process. It is a process of preserving meat with the help of a solution made up of salt, sugar, nitrite, or nitrate

Pork is one of the most famous meat kinds in the world. It is wealthy in proteins, vitamins, minerals, and different vital nutrients. Pork divides into large sections referred to as primal cuts, which are then broken down further into individual retail cuts. Bacon and ham are two of them.

Bacon and ham each cut from a pig (pork). The difference between them depends on which component of a pig is taken for meat and the process of curing. It makes them pretty different in the end. Ham usually can be cured through smoking, whilst Bacon cured with salt.

Bacon is a kind of salt-cured pork crafted, usually from the pork belly or the pork’s less fatty region. The pig’s components include the back, loin, or abdomen, and that’s where the types of bacon distinction occur. For example, the kinds of Bacon include side bacon and back bacon. The side bacon cuts from the pig’s side, which is famous because of its long layers taken from the pig’s side; it is quite thick and fatty. 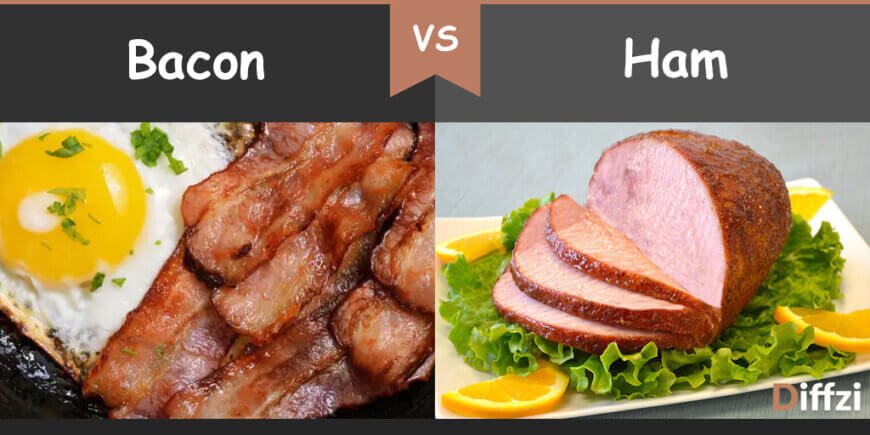 The other is back Bacon taken from the loin in the middle of the back. It can be eaten on its own, as a side dish, or used as a minor ingredient with different delicious dishes. It is offered uncooked and ought to be cook before being eaten. The Bacon we purchase from the meat shop or delicatessen is usually gone through a preservation process which soaked in the salt/nitrates, sugar, or smoking. There are numerous different varieties of Bacon. The types of Bacon depends on the slice thickness and portion of the pig

Let’s not complicate it and say ham is cut from the pork’s leg.

Ham is the cured and cooked meat prepared from the hind leg and rump. It is a  less precise term,  which means it could also refer to meat apart from pork, including turkey ham. It can be dry-cured in a salt-based mixture, or wet cured in a liquid brine.

Ham go through three different processes of pre-cooking which are curing, aging, and smoking, that’s why it can be eaten right away after purchasing it

The curing process is the type of process in which a solution containing a mixture of salts, sugar, nitrates, sodium nitrate, potassium nitrates, sodium phosphate administered into the fresh ham. After injecting the solution, the ham is cooked at 150 F.it’s temperature to make the ham bacteria-free.

The second process is aging in which the ham is salted and stored in a temperature-controlled ventilated room for an extended period.

The third process is smoking in this process; The ham is smoked at around 60F.

Key differences between Bacon and Ham