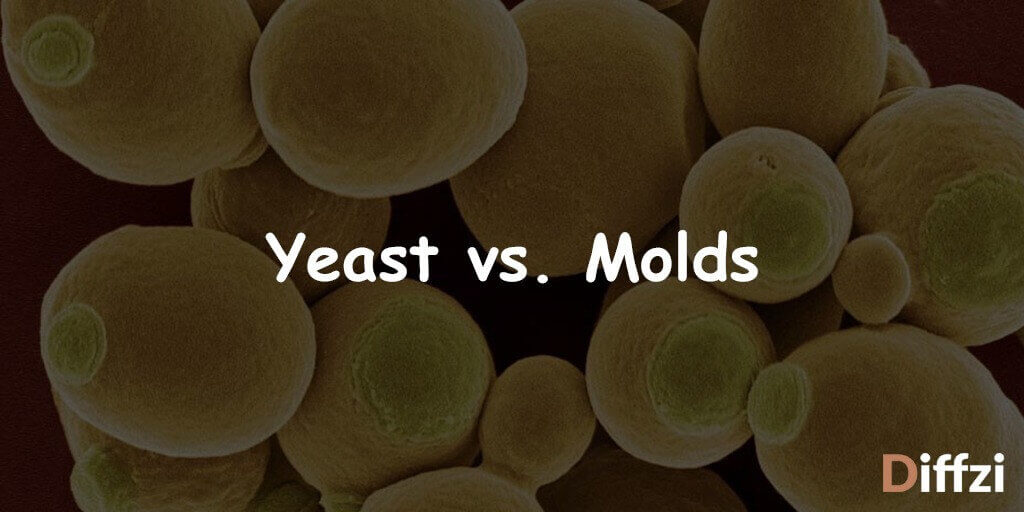 Yeast is usually white (colorless) and has a smooth surface. Molds are of many colors, i.e., brown, purple, pink, orange, green, black). They are fuzzy and wool like on touch. Yeast has 1500 subtypes which are used for many industrial purposes  while there are almost 400,000 types of molds which are also used in industry. Yeast does not have spores while molds do have. Yeast does not have true hyphae while molds have true hyphae. Hyphae are microscopic filaments.

Yeast is threadlike in structure (filament shaped) while molds are oval or rounded. Yeast is used for the baking purpose in industry, in alcohol formation, as additives and food beverages. Molds are used in food production, for cheese making, biodegradation and in making antibiotics. Yeast is commonly found on the skin of mammals and in fruits and vegetables while molds are commonly found in moist and dark places or in damp.

Yeast causes many diseases in the body like inflammatory bowel disease. Many patients, whose airways are hypersensitive to yeast, may develop asthma. Molds also cause respiratory problems. Some persons may develop allergies from it.

Contents: Difference between Yeast and Molds

Yeast is a type of fungi which are a unicellular organism, colorless and thread-like or filamentous shaped in appearance. They do not contain true hyphae, rather they have a type of pseudo-hyphae, and they are non-spore forming fungi. They reproduce by asexual mode of reproduction which includes binary fission and budding. In binary fission, as the name indicates, a cell is simply divided into two daughter cells by simple mitosis. In budding, a bud appears on the cell. Genetic material replicates itself, and a daughter nucleus is formed which moves in the bud. Ultimately the bud is separated which is now the new yeast. Almost 1500 species of yeast have been identified yet. It is found in vegetables, fruits, on the skin of humans and other mammals and at some other places. They can grow in both aerobic and anaerobic environment.

Molds are also a type of fungi which are rounded to oval shaped and reproduce by both asexual and sexual mode of reproduction. If they reproduce by the sexual method, they do so by meiosis, and genetic variability in the next generation takes place. Asexual reproduction occurs by spore formation and budding. They have true filament shaped hyphae and spores.  Almost 40,000 species of molds have been identified yet, and they are found in dark, dusky and damp filled places. They achieve their nutrients by decomposing the organic waste material present around them, and thus they act as natural decomposers of the environment. They have widespread use in industry in making antibiotics like penicillin, cyclosporin and cheese production. They can cause allergic disorders like asthma, skin disorders and respiratory diseases in humans. They are treated with conventional antifungal drugs.