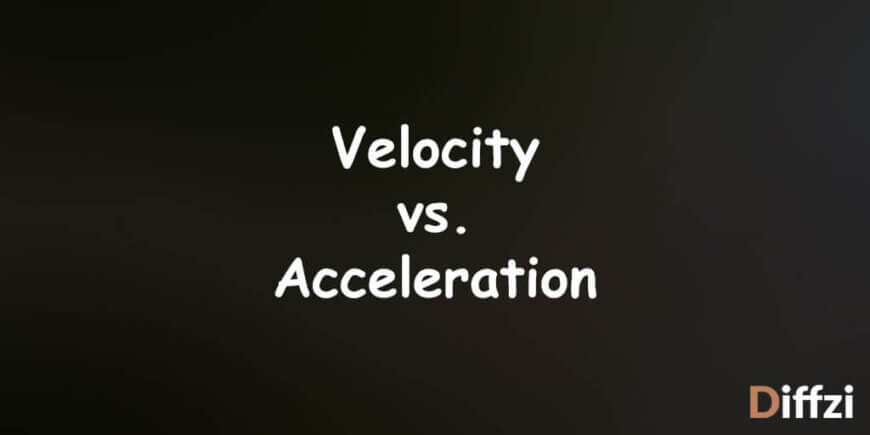 Both velocity and acceleration are the basic concepts in physics which are utilized to describe motion. For a typical person, Velocity and acceleration both are same while a person related to physics understands the fundamental difference between them really well. Motion is the movement or the change in the position of a body with respect to time. Walking, running, driving, diving, flying of birds and falling of leaves etc., are all the countries of movement. Velocity is the rate of the moving body in a particular direction while acceleration is the change in velocity of the body with respect to time.

Contents: Difference between Velocity and Acceleration

Velocity is the distance the moving object has covered in a particular direction in a specific interval of time. In other words we can say it is the rate of change of displacement. When an object moves up to a particular point and then back to its starting place compared to the velocity of the moving object will be zero. It’s a vector quantity, i.e. both size and direction are expected to explain it. Velocity is used to gauge the time taken by a satellite to get to the moon. Its unit is m/s.

The velocity of a moving object can be find out by following formula.

If a vehicle is moving 100m in 10 minutes towards north than its velocity is 10m/s towards the north.

There are two forms of acceleration.

If a body is moving with uniform speed in a circular route than its acceleration is called centripetal acceleration since the direction of the movement is changing every second.

A sort of movement in which there is not any change in direction while rate is changing with time is called tangential acceleration.

Acceleration of a moving object can be find out by following formula.

Key Differences between Velocity and Acceleration

According to preceding discussion, it is concluded that pace of change of displacement of a moving body with particular direction is known as its velocity whereas the rate of change of velocity of the body is called acceleration that’s also a vector quantity.