The key difference between T cells and B cells is that T cells acts against the invading bacteria and virus and kills them, also kill the infected cells while B cells form plasma cells which further form antibodies which act against antigens. 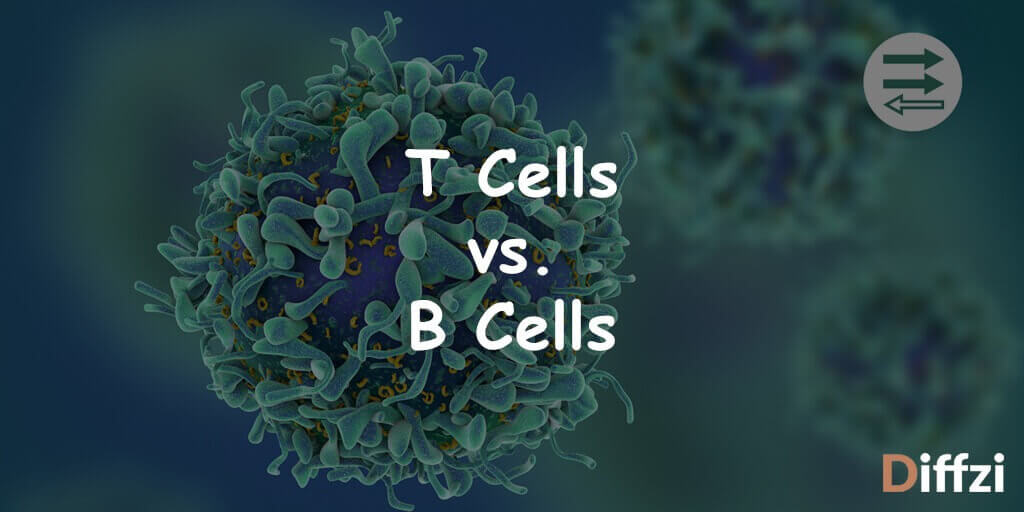 Both B cells and T cells are the types of Lymphocytes which are a type of white blood cells, the major part of our immune system. Lymphocytes provide immunity to our body against infections. There are many differences between T cells and B cells. T cells directly kill the infected bacteria and virus or the infected cells while B cells form plasma cells which are further processed to form antibodies that act against the antigens.T cells are originated in the bone marrow while maturation occurs in thymus B cells are originated and matured in bone marrow in mammals and in bursa of Fabricius in birds.

Cytotoxic T cells directly kill bacteria, virus or infected cells. Helper T cells help the cytotoxic cells in their function. Suppressor T cells suppress the immune system when all the pathogens and infected cells are removed. Memory T cells make the memory of the invading pathogens so that when the attack of the same types of pathogens occurs latterly, the immune system can respond early. When talked about B cells, B cells form the plasma cells which function is the formation of antibodies which kill the antigens released by virus, bacteria or other antigens entering the body. Memory B cells make the memory of foreign antigens so that on the next attack of similar antigens, the immune system can give the early response.

Contents: Difference between T Cells and B Cells

What are the T cells?

T cells are the type of lymphocytes which form the major part of our immunity. T cells were named so because they were initially discovered in the thymus. Initially, they are synthesized in bone marrow while their further maturation occurs in the thymus. They form almost 80% of total lymphocytes. T cells secrete the lymphokines which kill the viral or bacterial infected cells. Also, they activate B cells to release antibodies, and thus immune response is triggered. The life span of T cells longer depends upon the presence of infection in the body.  There are many types of T cells. Cytotoxic T cells directly kill viral or bacterial infected cells. Helper T cells help in the regulation of the immune system of the body. Suppressor T cells suppress the immune response when infection is resolved. Memory T cells make the memory of invading pathogens so that the immune system may give a quick response on the next invasion of the similar pathogens.

T cells are present within the lymph nodes, but when pathogens invade, they move towards the infected site.

What are the B cells?

B cells also type of lymphocytes which form the plasma cells. Plasma cells secrete antibodies which act against foreign antigens. Antibodies may be released by pathogens, or any foreign substance in the body acts as an antigen. The lifespan of B cells is often shorter.