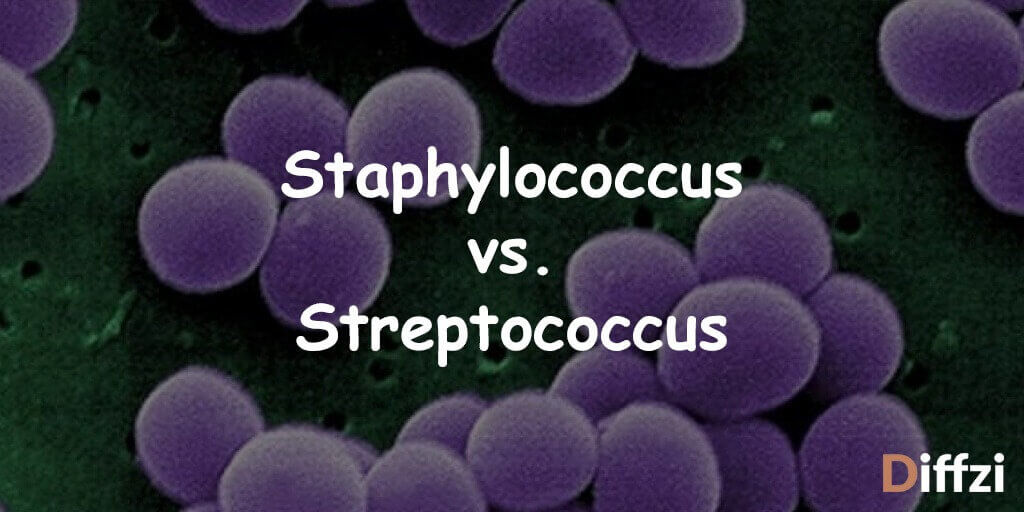 Contents: Difference between Staphylococcus and Streptococcus

Staphylococci are gram-positive bacteria which are round in shape and arranged in the form of clusters resembling grapes. Since they are arranged in multiple directions, their division also takes place in multiple directions. They have the ability to produce catalase enzyme, the enzyme which converts H2O2 in oxygen and water. Some of the species of staph also have coagulase enzyme; this enzyme causes the coagulation of blood.

Normally these bacteria are present on the surface of the skin, and thus, they are important causative agents in skin infections, like a boil, furuncles, cellulitis. The common symptoms of infection with staph are skin redness, swelling, itching, and pus formation. They also cause wound infections and infection at the surgical incision site. Other diseases caused by staph are arthritis, meningitis, encephalitis, infective endocarditis, and toxic shock syndrome. They do not cause alpha hemolysis but some species cause beta hemolysis. They cause infection by endotoxin production and hence cause toxemia (infection in the blood). They do not need nutrient enriched media for their growth. The infection is treated by traditional antibiotics.

Streptococci are also gram-positive bacteria which are of a round shape and arranged in the form of chains in a linear fashion. Hence they are arranged in unidirectional; their division also occurs in a single dimension. Almost fifty species of streptococci have been identified till now. Normally they are found in the upper and lower respiratory tract, so the common symptoms of their infection are chest tightness, congestion, shortness of breath, chest pain, wheezing, coughing and sneezing.

Other diseases caused by them are rheumatic fever, pneumonia, meningitis, encephalitis, kidney infections, and endocarditis. They do not produce catalase and coagulase enzymes; hence they do not have the ability of blood coagulation. They have the ability to cause alpha or beta hemolysis. The infection with streptococci is treated with traditional antibiotics.

Key Differences between Staphylococcus and Streptococcus