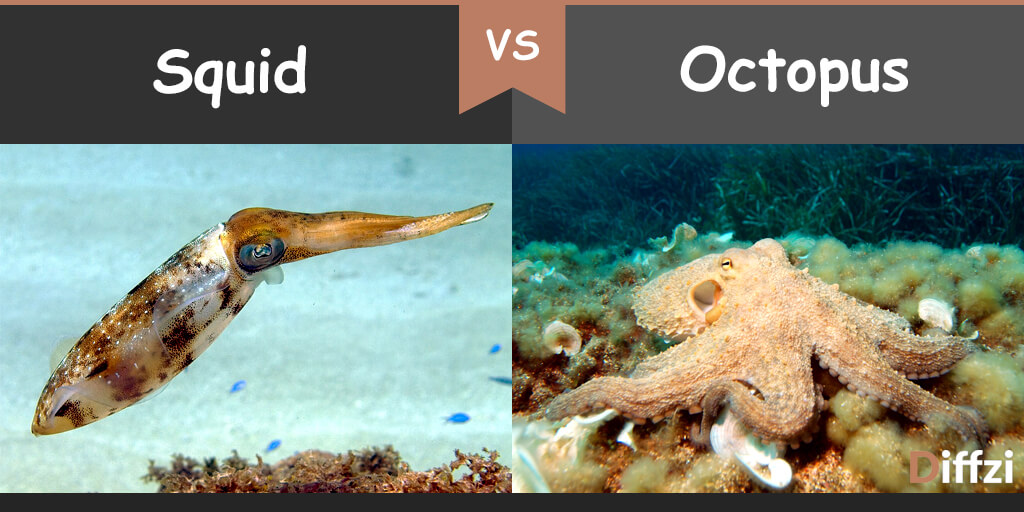 Squids and Octopuses are cephalopods which means they both are head footed aquatic animals. Squids and octopuses live in saltwater, and their blood is blue as it contains copper.

The main difference between squids and octopus is physical structure and behaviour of these animals. An Octopus can be well-known for its eight arms and has a roundish head.

On the other hand, squid will have ten of these appendages, eight are arms and two are tentacles, and the shape of the head of a squid is triangular. Also, they have two fins on their head.

So, the differences between the squids and octopuses are discussed below

Squid is the head footed (cephalopod) animal which has no feet, their head is the most important feature, and they have three hearts. They also have gills just like fishes. The larger squid can weigh more than 1000 pounds.

A squid has a long and soft body with a bony plate known as a pen, which acts as a flexible backbone. They have a head which is triangular, eight arms in the rear and two tentacles which are equipped with suckers and hooks. Moreover, they have two fins on their head.

The size of squids may vary between 60 centimeters to 20 meters long, and the smallest species of squid; the sepiolid is under 2.5cm (1 inch) long. The lifespan is between 6 months for the smaller squid up to 5 years for the larger squids.

They swim in the open ocean and catch the prey with their two extra tentacles with the sucker rings, and then they tear off bits of flesh and tear the meat into their mouths with their beaks.

Squids live in the open sea, thrive at depths, and generally, their habitat depends on their types. Just like an octopus, they can also live by themselves, but mostly they live in groups in their early life.

Squids mate in large groups, after mating the female squid lays eggs, one female squid can produce thousands of eggs at a time. Then she will spread the eggs in the hidden areas of water. Moreover, the female doesn’t wait for the eggs to hatch; they go away after depositing them.

An octopus is a cephalopod which has a round head, soft body, and eight arms, each with two rows of suckers. They live in saltwater and get food by piercing it and injecting it with venom. They have three hearts, and their blood is blue.

An octopus has a head which is round in shape and eight arms which radiate from it such as spokes of the wheel. However, the octopus has no fins except some species which are found in deep water such as the Dumbo Octopus.

The size of the octopus may vary from 1 cm to 9 meters. Mostly octopus can survive between 1 to 3 years.

Octopus are solitary hunters, they grab and catch the prey on the seafloor with their arms then inject the prey with venom to paralyze it. They dissolve the prey’s meat by using their saliva.

Octopuses mostly prefer living on the seafloor, from the shallow to the deep waters. They are solitary creatures as they live by themselves.

The male octopus uses a specialized arm which is known as hectocotylus to transfer sperm to the mantle cavity of the female and the females lay almost 150,000 eggs in a week, and she dies after the eggs have hatched whereas male octopus dies after few months of mating.

Key Differences between Squid and Octopus

However, both octopus and squids are sea mollusks which belong to the cephalopod class. Octopus has a head and eight arms, they are solitary animals. They mostly live in saltwater. On the other hand, squids have a triangular head, two fins, eight arms and two extra tentacles and a stiffer backbone structure which is known as pen and they prefer to live in groups.