The difference between velocity and speed can be explained as that velocity is the speed including the direction of motion while speed does not tell about direction. Speed is actually the magnitude of the velocity. Speed can be defined as “rate of change of position of an object” while when it specifies direction also, it is termed as velocity. 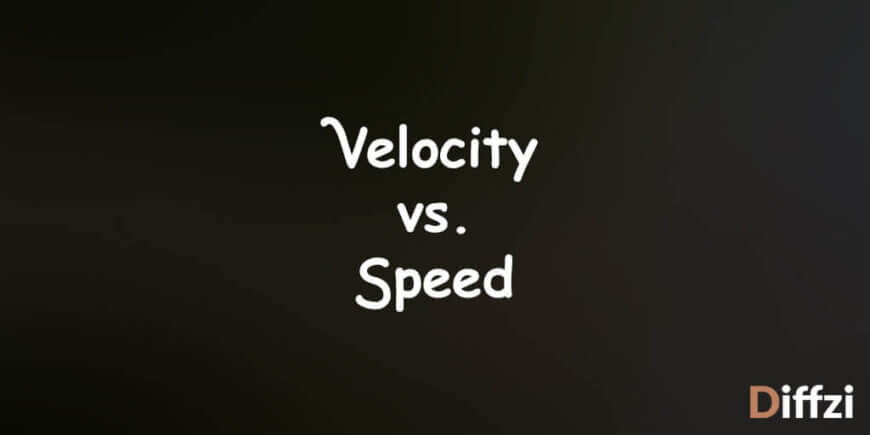 The rate of change of position of an object is actually the speed of that object while the speed of the object in a particular direction is termed as velocity. Both speed and velocity have the same units, i.e. meter/sec or Km/hour.

The speed of an object is actually the magnitude of the velocity. While velocity has magnitude plus direction.

In terms of types of physical quantities, speed is scalar while velocity is a vector. Vector quantities require direction to define them while scalar quantities do not require it.

Speed can also be defined as the distance traveled by an object per unit time while velocity is actually the displacement covered by an object per unit time. Distance tells about the total path traveled by the object while displacement tells about the shortest path required to travel by the object to reach the destination. Speed specifies at what speed some object is moving while velocity specifies in which direction some object is moving.  Speed determines the rapidity of something while velocity determines the rapidity and position of that object because now direction has also been added. Speed any moving object is always positive. It cannot be negative or zero. While the velocity of any moving object can be positive or negative.

Average speed can be calculated as

While the average velocity can be calculated as

SI unit of both speed and velocity is the same, i.e. m/sec.

Contents: Difference between Speed and Velocity

The speed of an object can be defined as the distance covered by the object in unit time. It can be defined completely by its magnitude, so it is a scalar quantity. It is actually the quickness of the body, i.e. how fast or slow an object travels. In system international, it is measured in the unit, i.e. meter per second (m/s), but commonly the unit used is kilometer per hour (Km/h).

Average speed can be calculated as

Velocity is actually the speed of any moving thing in a specific direction.

It includes the magnitude of speed plus direction of the object, so it is a vector quantity. So, if the velocity of an object is required to know, it’s mandatory to describe in which direction it is moving.

Its unit is also meter per second or kilometer or hour. The velocity of an object is actually the displacement of the object per unit time. Displacement is the shortest distance necessary to travel to reach the destination. Since displacement is a vector quantity, so velocity is also a vector quantity. The velocity of a moving object can be positive or negative or zero, unlike speed which can never be negative for a moving thing.

If we want to know the velocity of a bullet emitting from a gun, we must know its speed and the direction in which it is moving.

Average velocity can be calculated as

Key Differences between Speed and Velocity

Speed and velocity are the basic physical quantities in Physics also we are encountered with them in our daily life. They can be mixed with each other, so it is compulsive to know the difference between them. In the above article, we learned clear differences between speed and velocity.