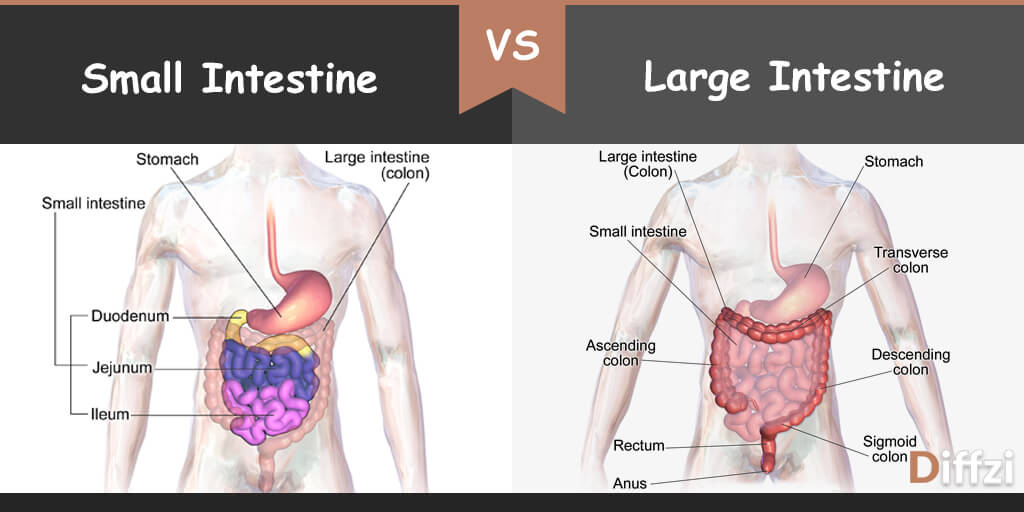 The tube emerging from the right side of the stomach and extending to the anus is called the intestine. Its main function is to absorb water, electrolytes, and nutrients from the food to provide to the body. It is divided into two types; the small intestine and the large intestine.

The main role of the small intestine is the absorption of the nutrients from the digested food, whereas the large intestine absorbs water and salt and involve in the production of vitamins.

What is Small Intestine?

The small intestine is located between the stomach and the large intestine. It is coiled in the abdomen. This tube-like structure has the narrowest diameter of all the parts of the alimentary canal, but its length is 4.5 to 7 meters, which is the longest one. Internally, the small intestine has two growths, villi (microscopic finger-like projections) and circular folds (palicae circulares).

Villi help in enhancing the surface area for absorbing the maximum nutrients available. Circular fold slows down the movement of the food in the small intestine. So, the food remains for a longer time in this intestine for digestion and absorption.

The small intestine possesses three parts; duodenum, jejunum, and ileum. Duodenum is the smallest part of these three parts. It starts at the end of the stomach. It is located adjacent to the stomach. Duodenum has a small opening through the biliary system (liver), gallbladder, and pancreas, which helps it in the breaking of carbohydrates, fats, and proteins. This small opening also allows the digestive secretion to flow into it.

The second and middle part of the small intestine is the jejunum. It is the central section of the abdomen. It is deep red because of the extensive blood supply. The peristaltic movements of this part are very rapid and vigorous. The mesentery ducts that support this region have little fat. The finger-like projections (villi) are also found in jejunum, which helps in the absorption of the digested products.

The third part and the last part, ileum, end in the large intestine. It is located in the lower abdomen and helps in the absorption of the remaining vitamins, nutrients, and bile salts. Its walls are thinner and narrower than the duodenum and jejunum. Blood supply to this part is very limited, and peristaltic movements are very slow. The mesentery ducts that support this region have more fatty areas.

What is Large Intestine?

The large intestine also has other names as the colon or the large bowel. It has a wider diameter and short length than the small intestine.  It is the hindermost part of the alimentary canal and opens outside through the anus. It starts from the point where the small intestine ends. It has smooth muscles that contract and relax to work until the blood gets out through the anus.

Microflora of the large intestine helps in the production of vitamins (vitamin B1, B2, vitamin K, vitamin B12). It has longitudinal muscles called taeniae Coli which starts from the appendix base and ends up to the rectum. Along with the taeniae Coli, tags of the peritoneum filled with fats are found, which are called epiploic appendages or appendices epiploicae. The large intestine has sac-like structures called hastura, which are the contraction of the taeniae Coli.