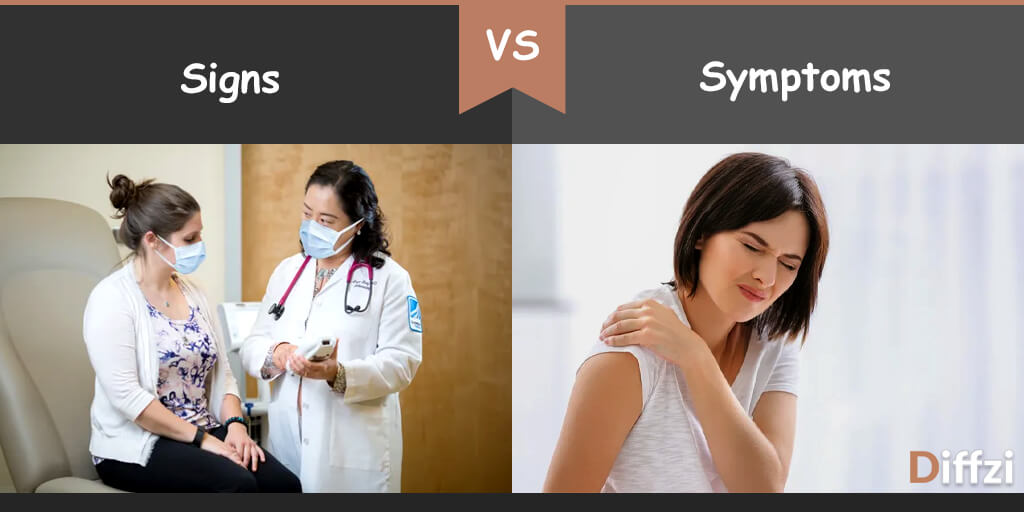 Signs and symptoms of a disease are confusing words for a non-medical layman and are mostly used interchangeably. These words have the same meaning but different features. Signs of any disease are observed by doctors or physicians, whereas symptoms are noticed by the patients themselves.

Physicians and health care professionals decide the disease of the patient by observing and diagnosing the patient’s body. In these measurements, they do blood tests, pulse rate, x-rays, take body temperature and in this way, reach the definite signs of the specific disease. Patients cannot diagnose conditions such as allergies, HIV, cancer, diabetes. These can be diagnosed only by medical experts. Signs are the physical demonstration of an individual’s body’s problems. But when the patient feels body pain, headache, muscle fatigue, these can be termed as symptoms.

Both signs and symptoms are beneficial in determining the diseases so that proper medication can be started. One is felt by the patient, and the other is diagnosed by the doctor.

Generally, a sign is a word that is used to indicate or provide information about something. In medical, this word is used by the health care professionals to get actual information about a particular disease by asking symptoms from the patients or by using measurable modes such as x-ray, blood test, and temperature. The most common sign is called “vital signs.” Vital signs include a patient’s breathing rate, heart rate, temperature, and blood pressure.

The signs are called the objective evidence of disease as they are observed by feeling, hearing, or seeing.  For example, fractures, swelling, and bleeding are signs. Signs are the physical characteristics of a disease. A range of devices is available to help doctors for identification and analyze the signs. These devices can detect the signs even not recognized by the patient. The stethoscope is used to listen to the sounds of the heart and lungs. A spirometer helps to measure lung function. Eye specialist uses Ophthalmoscope to examine the inside of the eye. X-ray imaging shows the damage of the bones. A sphygmomanometer is a device that fits around the arms and is used to measure blood pressure.

What are the Symptoms?

Symptoms are not visible to others and are considered as an indication of a particular disease. Symptoms should be taken seriously and should be consulted by the physicians. Some conditions show no symptoms at all. For example, a person can be suffering from high blood pressure for many years without knowing. Similarly, most cancers have no symptoms in the initial stages but show symptoms in aggressive steps. These are known as asymptomatic conditions. A disease without symptoms can be lethal.

There are three kinds of medical symptoms; chronic symptoms, relapsing symptoms, and remitting symptoms.
1. Chronic Symptoms: In this class of symptoms, there is a long-lasting pain that does not go away such as in cancer, asthma, diabetes and AIDs.

Key Differences between Signs and Symptoms

In conclusion, signs and symptoms are interchangeable and confusing words for non-medical persons. These words are actually used by doctors and patients as clues to get proper information for medication and treatment.