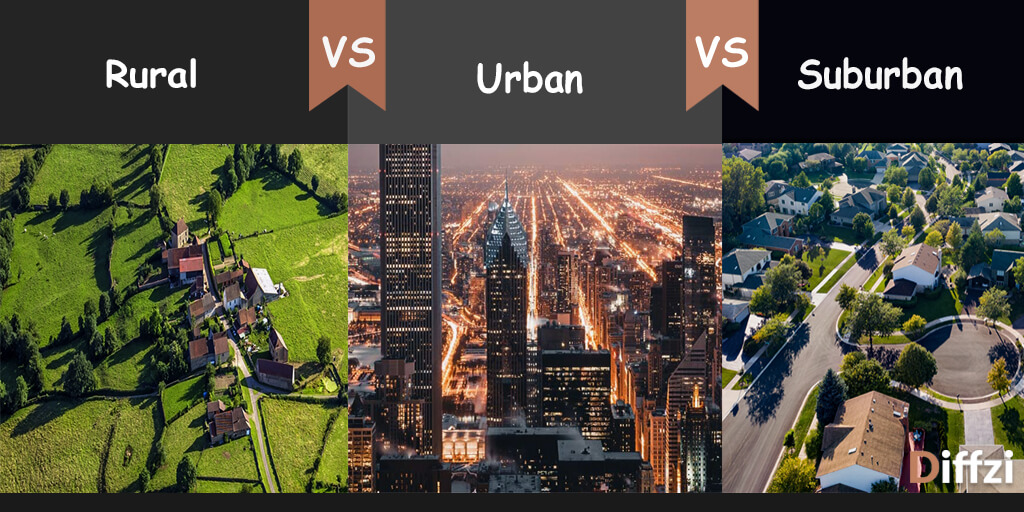 What are Rural Areas?

The majority of the homes in these areas are on an acre more than property. You won’t find high-rise apartment office buildings or shopping centers in rural areas.

Most of them work in agriculture. Domestic animals are also used to produce dairy products such as milk. They have little stores where you may buy food and milk.

There are not that many conveniences in these places. Rural residents must go to big cities for medical treatment, good public schools, and occasionally even shopping because not everything is available in this area.

What are Urban Areas?

Urban refers to areas with a large population and associated social and working facilities. Due to the high cost of land in city locations, homes in these communities are typically built very near together and have relatively small gardens.

They reside in multi-story blocks of flats with a lot of space. Some are relatively rich, and some are pretty simple. They contain all of the essentials as well as modern medical treatments.

In general, urban regions have over a thousand persons per square mile. Many businesses, particularly corporate offices with sites across the country or the world, are located in urban regions.

In urban regions, shopping malls are prominent. Stores and cafes are often frequent on a few levels of office towers.

What are Suburban Areas?

Suburban areas have grown up around the edges of cities, having a population that is higher than rural but lower than urban. Burbs are another name for these areas. They have modest shopping centers, which are lacking in rural places. These places are located close to or outside of cities.

These communities have limited resources and a high concentration of single-family dwellings near together. They have all of the necessities as well as excellent medical care.

They usually have more land than residences in urban areas and less land than homes in rural regions, with locked gates that only owners and their special guests can walk over.

These apartment complexes are typically located on larger plots of land, so they come with amenities such as swimming pools, tennis courts, and dog runs. Suburban areas are also home to restaurants, shops, and other commercial establishments.

The labels “rural,” “urban,” and “suburban” are used to characterize the various types of environments in which people live. Rural areas are often vast and with a small population, whereas suburban areas with a more significant population than rural areas and urban areas are densely populated.

Rural areas are connected to nature and open spaces, whereas urban are overcrowded. On the other hand, suburbs are areas with low crime and a quiet atmosphere, which many people say makes them the ideal choice to raise kids.