The main difference between rules and regulations is that rules are established and authoritative standard of principle while regulations stand for the sets of rules that have legal connotations. 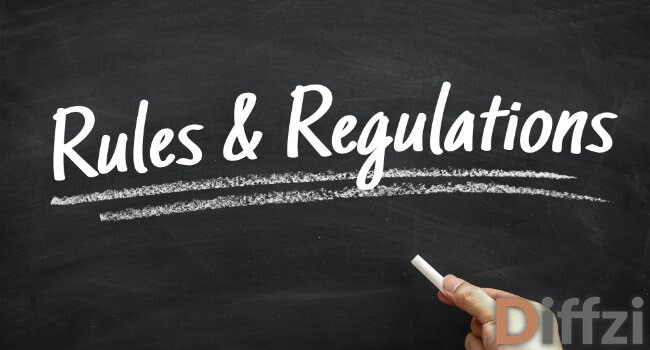 Contents: Difference between Rules and Regulations

Rules are mostly an informal set of guidelines that are designed to decide what a person must do and must not do. These are prone to be changed according to the environment, organization and people and altered depending on the situation. As these are informal standards in most of the cases so don’t require formal written instrument at all; however, can have written instrument in most of the cases. Both individuals and administrators can impose these. For examples in the case of the household environment, these are imposed by parent and in the case of the classroom environment, imposed by the teacher. These are more flexible and have low-end consequences in the event of a violation. These can be set up for games, sports or even being intimate with a partner. These help the people to learn how to prepare for living in society. In a nutshell, rules refer to standards and guidelines for activities. These may refer to human activities, science, law, and government.

According to system theory, regulations stand for a set of rules that have legal connotations. These have an official identity. Making regulations is not so easy. These are made after a lot of consideration and taking into opinions of the public (by voting), and so they must be followed by the general public as well. These are the strict standards that must be followed by the public at any cost. A rule can be changed into regulation if approved by the competent government authorities. For example, a regulation issued by the administrative or government agency becomes a legal rule. It becomes a restriction that has legal force. In addition to costs, these can result in the creation of various benefits and can create unintended effects such as defensive practice. As a general rule, efficient regulations can be defined as the set of those standards and guidelines where total benefits exceed total costs.