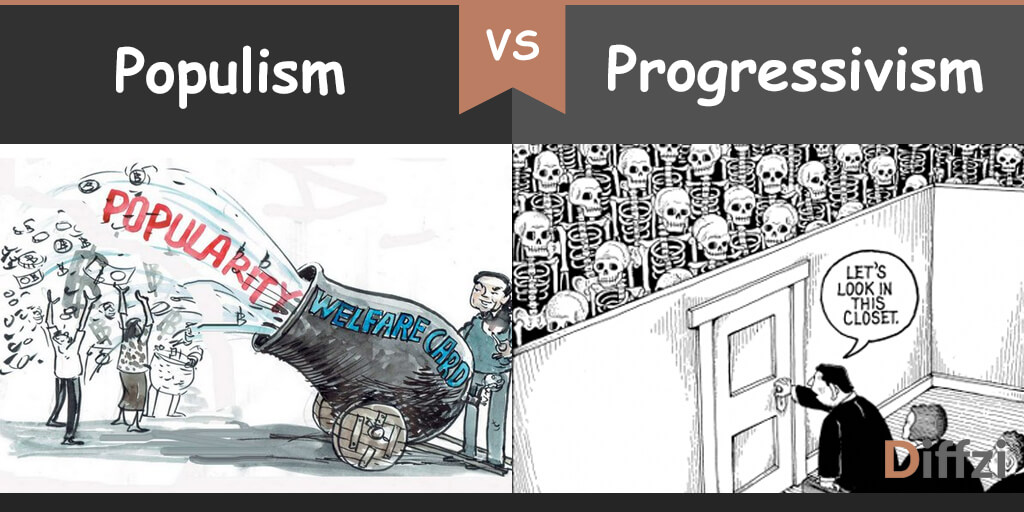 The main difference between populism and progressivism is that the Populists were mainly aggrieved farmers who advocated radical reforms while on the other hand, the Progressives were urban, middle-class reformers. They wanted to increase the role of the government in reform while maintaining a capitalist economy.

The populism arose in the late 19th century by the farmers about change in the economic system and progressivism started at the beginning of the 20th century by the middle class about the changing in the political system.

The populist movement started during the 1880’s. Farmers or those associated with agriculture believed industrialists and bankers controlled the government and making the policy against the farmers. Farmers become united to protect their interests. They even created a major political party. The party was called the people’s party which became known as the populist party. Populists drew its strength from rural areas.

Populist initiated a program in 1882 in Omaha, Nebraska.  They wanted to impose more income tax on wealthy people. Sought government ownership of the railroad, telephone, and telegraph systems. They believe on the government ownership and wanted to stop laissez-faire.  Populists wanted the secret ballot and direct election of the senators from their states which the government acceded to through the 17th amendment. The others demand such as the regulation of banks and industries, civil services reforms, 8 hours in a day of labor class were also accepted by the government. Why did Populism fail?

They were mostly poor farmers whose struggle to make a living made political activity difficult.

Middle class and well-educated people stated the progressivism movement in the early 1900s. They continue their struggle by remaining in the political mainstream. The unfair election system,  exploitation of workers, women and children, corruption in the business class and the legal system these are the major root cause of this movement. All these policies gave concessions to rich people. So that the rich people become the common enemy of progressivism.

The movement was a reflection of the dissatisfaction among the urban classes and those belonging to the middle classes. Despite the fact that most of the demands of the populists were bordered on the ideas of communism; finally, overwhelming majorities of their demands were acceded by the government, and they became the law of the land eventually. Why did Progressives achieve greater success?

Key Differences between Populism and Progressivism