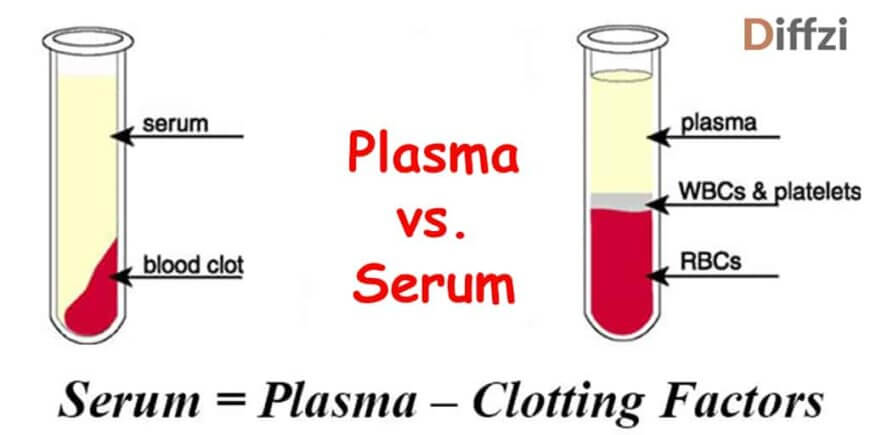 Plasma and serum both are routinely used for blood testing and are components of blood. The serum has a similar composition as plasma but it does not have clotting factors. Fibrinogen is involved in the blood coagulation process. It becomes activated by converting itself into fibrin.

Plasma is defined as the medium of blood in which white blood cells, red blood cells, platelets and other components of blood are in suspended form. The components of plasma are hormones, glucose, electrolytes, antigens, antibodies, nutrients and clotting factors while these clotting factors are not present in the serum and this is the basic difference between both of them.

Serum is also less in percentage volume than plasma. Blood plasma forms 55% of the total volume of blood. Serum contributes less than this percentage to blood because it does not have fibrinogen and other clotting factors.

Isolation of plasma is easy and less time consuming while isolation of serum is difficult and time taking process.

Anticoagulants are not required to separate serum while they are used for the separation of plasma because it has clotting tendency due to the presence of clotting factors.

The serum is mostly used for a routine medical procedure, i.e. for checking blood groups, diagnosis of diseases and other purposes while plasma is given to the patients who are deficient in blood cells. For example, fresh frozen plasma is consumed in the patients of Hemophilia B. Plasma is also used for the diagnosis of certain diseases.

The serum contains 90% water with minerals, hormones, dissolved proteins and carbon dioxide. While plasma contains 93% of water and 7% of component blood cells and other parts.

Contents: Difference between Plasma and Serum

Plasma is the liquid portion of blood and contains 90% water. It contributes to 55% of the total volume of blood. Plasma also contains fibrinogen ( which is converted to its active form, fibrin and cause clotting of blood when needed) and a protein called as albumin (which prevents fluid from leaking into tissues). The purpose of plasma is to transport nutrients, antibodies, antigens, hormones, proteins, glucose and electrolytes through the blood in all the body parts. Plasma has another job that is waste removal from all the body tissues. As plasma circulates through all the body, tissues and cells deposit their waste in the plasma that is thus cleared out.

Plasma is slightly yellow in color and transparent in which different types of cells float all the time. Plasma contains all the soluble proteins and clotting factors. Plasma is separated from blood by centrifugation. The process of isolation of plasma from the blood is called plasmapheresis. Plasma can be got before the coagulation of blood. Plasma is used mostly for problems related to blood clotting. It is given to the patients suffering from the deficiency of any type of blood cells.

It is simple to say, serum is simply the plasma deficient in clotting factors and blood cells. When the clotting factors are removed from plasma, the protein fibrinogen is converted into fibrin. It is worthy to note that serum is a fluid that plasma is liquid. Serum is got after the clotting of blood. Serum is used in many medical procedures but mainly it is used for blood grouping or typing. It is also used for diagnostic purpose for many diseases. The components of serum are hormones, nutrients, electrolytes, glucose and all other components of plasma except blood cells and clotting factors. It contains 90% of water and constitutes less than 55% of total volume of blood.

Key Differences between Plasma and Serum

Both plasma and serum are obtained from blood and routinely used in medical procedures. Both are similar in composition except that serum does not have clotting factors so they are often confused. It is important to know the difference between both of them. In the above article, we leaned the clear differences between plasma and serum.