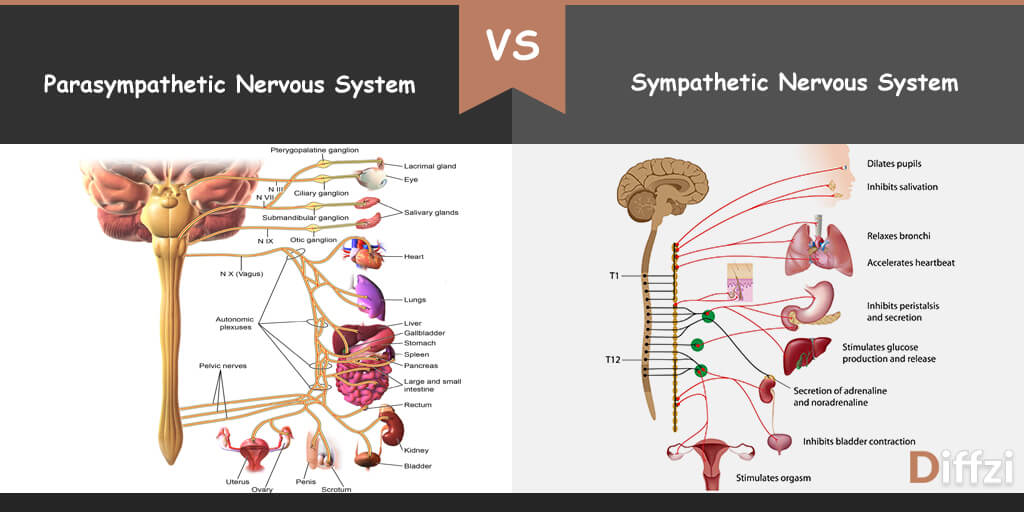 What is Parasympathetic Nervous System?

It is generally involved in controlling the unconscious actions of the body such as digestion, respiration, and heart rate when the body is feeding, resting, or relaxed. It basically undoes the work of Sympathetic Nervous System. For example, during a fight and flight response, (during stress or injury) the Sympathetic Nervous System performs the following functions,

Conversely, the parasympathetic nervous system is involved to bring the body back into homeostasis to conserve precious energy and do the following functions,

What is Sympathetic Nervous System?

The sympathetic nervous system prepares your body to either run from danger or fight back. It’s also activated in response to mental or physical stress. During the fight-or-flight response, the following occurs:

The SNS is perhaps best known for mediating the neuronal and hormonal stress response commonly known as the fight-or-flight response, also known as sympathoadrenal response of the body. This occurs as the preganglionic sympathetic fibers that end in the adrenal medulla secrete acetylcholine, which activates the secretion of adrenaline (epinephrine), and to a lesser extent nor adrenaline (nor epinephrine).

Therefore, this response is mediated directly via impulses transmitted through the sympathetic nervous system, and also indirectly via catecholamines that are secreted from the adrenal medulla, and acts primarily on the cardiovascular system.

Messages travel through the sympathetic nervous system in a bidirectional flow. Efferent messages can trigger simultaneous changes in different parts of the body.