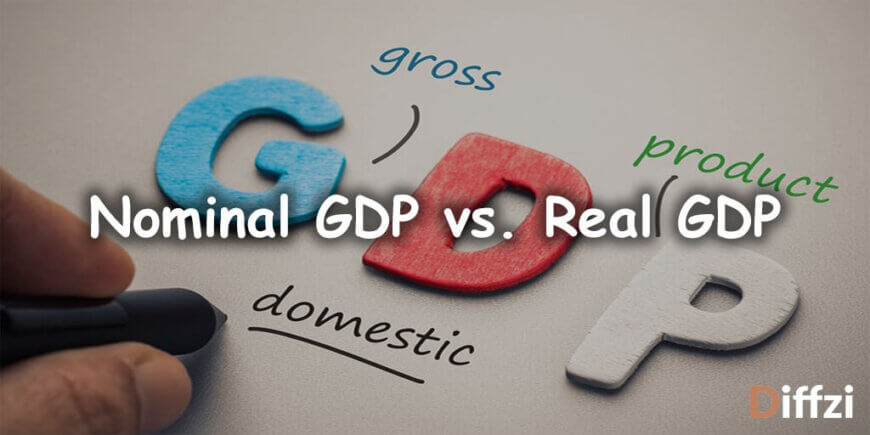 What is the Nominal GDP?

Nominal GDP is the value of GDP evaluated at current prices in a specific period; this includes the impact of inflation and is normally higher than the GDP. In simple term, it is a GDP value that is calculated before the adjustment of inflation.

Nominal GDP that is also called as Raw GDP calculate the overall value of goods and services and other economic output produced by a country in a particular period normally a year. It is one of the important terms in two GDP methods that are used to calculate the GDP of a country. For example in the year 2005, the nominal GDP of the USA was $200 billion.

However, due to increasing the prices from the base year 2001 to 2005, the GDP is $180 billion. Here the lower Real GDP reflects the price changes while price change has no effect on Nominal GDP.

What is Real GDP?

Real GDP is an inflation-adjusted value of GDP. It expresses the value of goods and services produced in a country at base-year prices. Since it is an inflation-corrected figure, so it is deemed to be an accurate indicator of economic growth. It is calculated by taking into consideration the impact of inflation or deflation while calculating the overall monetary value of product and services produced in a country for a particular financial year normally the previous one.

It is considered to the more reliable GDP calculation technique because of being free from free fluctuations and exclusively considering the production only. For example, the GDP of the USA in a year is $100. Next year it rises to $105 along with an increase in an inflation rate of 3%. Here we can say that Real GDP rises to $102 only because of inflation that must be accounted for.