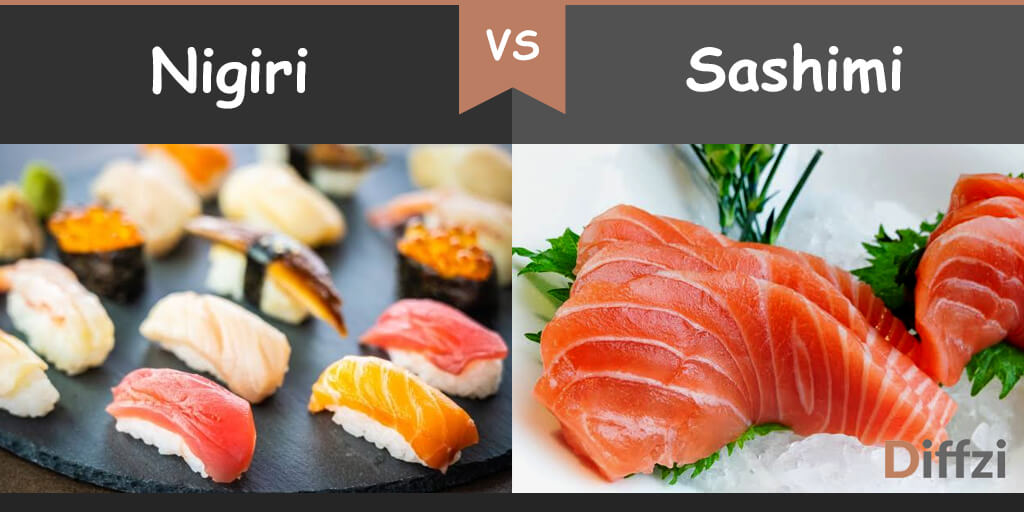 The main difference between Nigiri and Sashimi is the ingredients and method of preparation. Nigiri is one of the types of sushi, that consists of thin slices of raw fish topped over a layer of sweet and salty vinegared rice on the other hand sashimi is technically not sushi because it does not include any kind of rice which is the main ingredient of sushi.

Sashimi is a simple dish consists of thin slices of raw meat or fish served with pickles, soy sauce, and wasabi paste and often garnished with shisho leaves, daikon radish, and toasted nori.

Both Nigiri and Sashimi are Japanese dishes and look very similar. On visiting a sushi eatery, you will come across a dozen sushi recipes that could confuse you especially if you are unfamiliar with the food itself.

Many people love nigiri more because they feel like nigiri has more of a substance while sashimi is more of a side dish rather than a meal.

These days Japanese cuisine especially Nigiri has gained a lot of popularity and is well-loved by a lot of people from all around the world and it is also a very good source of heart-healthy omega-3 fatty acids.

There are varieties of sushi available but one particular type that is quickly gaining popularity is Nigiri Sushi.

The word two fingers refer to the amount of rice for each Nigiri that must be enough to fit comfortably between the chef’s two fingers when pressing down on the rice. How to make a Nigiri?

Nigiri is always made of seafood usually, the main ingredient is raw fish but it can also be made of octopus, shrimp, and squid but never with meat.

The most important step while making a Nigiri sushi is to maintain the perfect balance between the rice and topping. The ideal sushi is not too loose or too tight and must have the right amount of space between grains of rice.

Sashimi, known as the star of Japanese cuisine is something raw, sliced, and served. It can be made of anything like raw fish, beef, scallops, and even chicken served with soya sauce and wasabi (green ground ginger).

The history of eating raw fish or meat is said to have started with the history of humanity. Japan had easy access to fresh fish throughout history as it is surrounded by ocean and in Japanese, the word sashimi means “pierced body” that can be eaten all on its own. How to make Sashimi?

When it comes to sashimi, almost any fish can be chosen but some of the best seafood varieties are tuna, scallop, bonito, kingfish, or snapper.

The best way to eat sashimi is to use a pair of chopsticks, pick up a slice and dip it in soya sauce with wasabi.

Key Differences between Nigiri and Sashimi

Both nigiri and sashimi are staples of traditional Japanese cuisine. The only difference between the two is the presentation and flavor due to the difference in their ingredients.