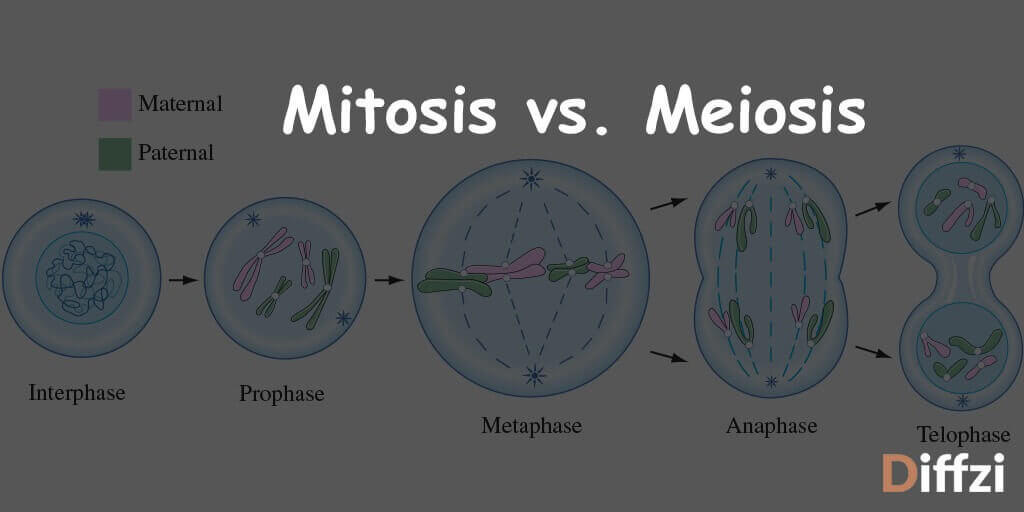 The stages  of mitosis include prophase, metaphase, anaphase, and telophase while the phases of meiosis occur in two steps. Meiosis 1 and meiosis 2. All the four phases, i.e., prophase1, metaphase1, anaphase1 and telophase 1 occur in meiosis 1, and then they are repeated in the same sequence in meiosis 2. No genetic variation takes place during mitosis. The daughter cells are 100% identical to the parent cell while genetic variation takes place during meiosis because synapsis takes place in the non-sister chromatids of homologous chromosomes.

Chromosomes do not pair together in mitosis while paring of chromosomes and crossing over (transfer of genetic material) takes place in meiosis that results in genetic mutations. During mitosis, nuclear division (karyokinesis) occurs during interphase and division of cytoplasm (cytokinesis) takes place during telophase while in the process of meiosis, nuclear division occurs in interphase 1 and cytokinesis takes place in both telophase 1 and telophase 2. Prophase (phase before cell division occurring) is of short duration in mitosis. It continues for only a few hours, and it is a simple process while prophase of meiosis lasts for many days and very complicated.

Contents: Difference between Mitosis and Meiosis

Normally mitosis occurs in our nails and hair throughout our life. It also takes place during growth, and once the full growth has been achieved, it stops. It also functions to heal the wound and regenerate any defect in the body. Mitosis takes place in four phases, i.e., prophase, metaphase, anaphase, and telophase. During prophase, preparations for the cell division are carried out. Enzymes are synthesized, and energy is stored. DNA replication and nucleus division (karyokinesis) also takes place during this phase. Nuclear material is present in the form of chromatin. Then during metaphase, chromosomes are arranged in the equator line. During anaphase, chromatids are separated from each other and move towards the peripheral site. During telophase, a division of cytoplasm also takes place (cytokinesis), and thus one cell is converted to two daughter cells having the identical genetic material and the same number of chromosomes.

It is a type of cell division in which one parent cell is divided into four daughter cells, and the number of chromosomes in daughter cells is half than the number in the parent’s cells. It is carried out in germline cells for sexual reproduction in the higher animals.

Key Differences between Mitosis and Meiosis