Many people consider Iron and Steel to be similar and get confused about the differences. It is safe to say that they are similar and that actually is the main difference as well. Iron is a pure substance that exists on its own while steel is considered an alloy of iron. The other difference between them is that iron is regarded as a brittle material while steel is viewed as an active material. 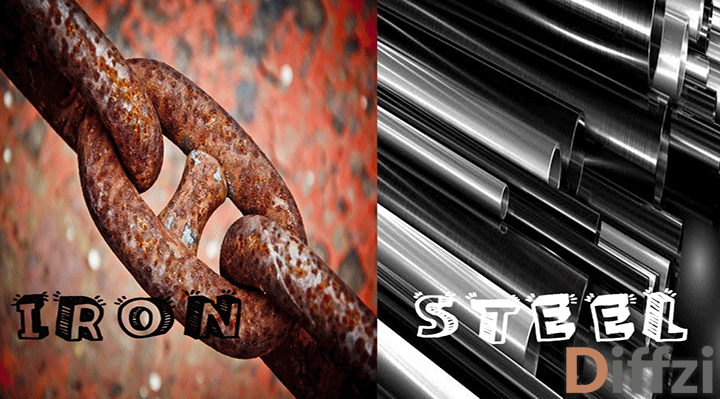 Contents: Difference between Iron and Steel

It is a chemical element which is used in abundance all over the world and is relatively famous because of the properties and uses it has. It is the purest metal in the world with around 90% of the industry based on refinery using Iron as the primary source. It also has many uses when it comes to construction and manufacturing steel and is used in civil engineering for building purposes. It also has a strong presence in biology where it has an essential role when it comes to human body and is also present in food. There are different types of iron which are found in the world today. The most famous one is the wrought iron which is present in the original form and is a mixture of pure iron and silicate. It has a very low percentage of carbon present and therefore widely used in making tools. The next form is the pig iron which has a high proportion of carbon present which can be as high as 4%. It is produced in the blast furnace and is considered the original form of all iron ores. The next one is cast iron, and that is obtained from the white metal and is relatively soft in comparison to others. It has a high yield density and therefore does not corrode easily. Steel is another important type but will be discussed separately in the next paragraph. It is mostly used in industry for the purposes of construction, producing tools, in cars and other automobiles and also combined with other chemical substances for products.

It is perhaps the most important type of iron ore which is used for various purposes and has many applications which are essential for people in the world. It is mostly used for construction and other purposes because of its strength and low cost. Many steel industries are working currently to produce it and therefore is used in tall building structures or tools which are helpful for other purposes. The amount of carbon is around 2% which is neither considered low nor high and therefore gives a balance as compared to other iron ores. It had been produced for a long time, but proper industry began in the 17th centuries. It is one of the most common metals in the world with around 2 million tons being produced on a yearly basis. It is heat treated to make it more intense and pure and processes such as annealing, quenching and tempering are used to give it a proper look. There are many ways through which it can be produced, and that includes the reprocessing of iron to reduce the amount of carbon, and at a particular time, more elements are added to it to make it even better. The best part about steel is that it can be recycled easily and therefore is the most recycled material since it has a lot of uses. There are different types of steel which include carbon steel and alloy steel. It is employed in the construction of roads, for trains and their tracks, appliances and utilized in the most famous buildings and towers such as Eiffel Tower and the London Bridge.