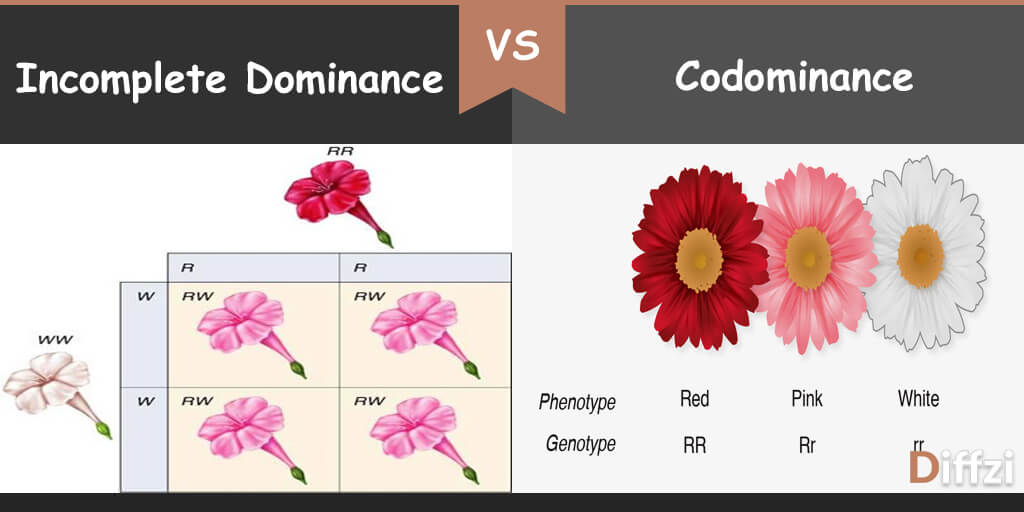 Genes are the segments of the DNA located on the chromosomes. These genes contain genetic information that is transferred from one generation to the other generation. Gregor Mendel studied genetics and proposed that the traits are inherited by the transfer of genes from the parents to their offspring. There are usually two alleles for each trait inherited by the animal cells. These paired alleles can be heterozygous or may be homozygous for a given character. Heterozygous pair has different alleles, whereas homozygous pair has identical alleles. When any two alleles are expressed in an individual, it may be by incomplete dominance or codominance.

When one allele for a particular trait does not completely dominate over the other allele, this is called incomplete dominance. The phenotype produced in incomplete dominance is the complete mixture of both dominant and recessive alleles. On the other hand, in co-dominance, both the alleles for a particular trait are equally expressed. As a result, the phenotype will show both the characters equally of both participating alleles.

In a single population, there are often many different alleles.  In an organism’s genotype, a set of alleles still determines its phenotype. Incomplete dominance and codominance differ from each other based on the pattern of gene expression.

What is Incomplete dominance?

Correns discovered incomplete dominance. In this type of dominance, one allele for a specific trait is not able to express completely over its paired allele. This is the reason for its other name, intermediate inheritance, in which the produced phenotype is the third type. In incomplete dominance, there is a combination of the phenotype of both the participating alleles. It is also called as semi dominance or partial dominance.

Height and hair color in offspring are two other examples of incomplete dominance in humans. Offspring will not have the same height or hair color as one of their parents but will often have a mixture of the two parents’ phenotypes.

In co-dominance, both the characters are equally expressed. Thus, the resultant phenotype will represent more than one character. Co-dominance is similar to the incomplete dominance in which both the alleles are expressed in heterozygotes.

The sickle blood cells are stuck to the blood vessels preventing the normal flow of the blood. The individuals having this disease are the homozygous recessive for the sickle cell hemoglobin gene.

In conclusion, incomplete dominance and codominance are studied in genetics. The study of genetics is challenging but understandable due to many contributions.