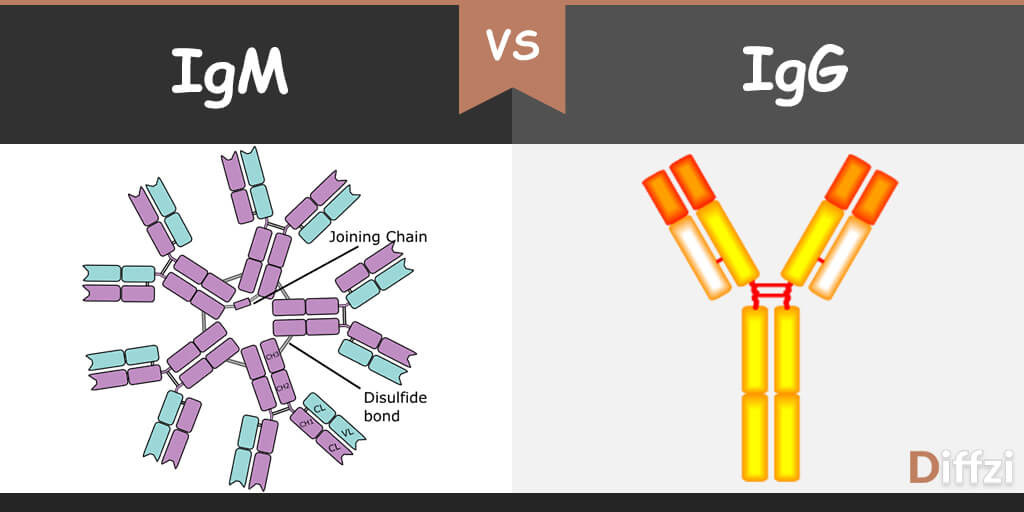 Immunoglobulins also are known as antibodies are proteins that are produced by specific immune cells called plasma cells in response to bacteria, viruses, and other microorganisms as well as from exposure to other substances that are recognized from the body as “non-self” harmful antigens.

Our body makes few different types of immunoglobulin antibodies including these:

Among all of these, IgG and IgM are often measured together to give doctors an insight about the immune system functioning and to detect and monitor an excess or deficiency of these immunoglobulins especially relating to infection or autoimmune disease.

IgG and IgM are two antibodies that are found in the blood and at a basic level, the main difference between them is the onset of action. IgG antibody is involved in the early onset of action, which means it is the first antibody to be developed immediately when the body is exposed to any foreign particle during acute infection while IgM antibodies are produced after a long term response to the chronic infection caused by new bacteria and germs.

It is the most abundant type of antibody that constitutes about 70 – 80% of total blood serum. It is a monomer (smallest antibody) consisting of a single Y-shaped unit that has 2 antigen-binding site and heavy chain of gamma (γ) as the well light chain of kappa (κ) and lambda (λ).

There are four subclasses of IgG differing on the basis of a number of disulfide bonds and the length and flexibility of the hinge region. Determination of IgG subclasses can be a valuable tool in indicating a potential antibody deficiency. For instance, severe and prolonged infections can provide an insight about the manifestation of disease.

In adults, IgG is the major immunoglobulin found in blood, lymph fluid, peritoneal fluid, and cerebrospinal fluid that plays a key role in humoral immune response against an antigen and promoting opsonization and phagocytosis. In pregnancy, due to its small size IgG is the only antibody that can cross the placenta and transfers the mother’s immunity to the developing embryo.

It is an important immunoglobulin in the passive immunization due to its longevity in the serum.

IgM, previously known as Y-macroglobulin is the default antibody produced by B cells. It is considered as default because it is the first antibody to be produced in response to an antigen.

Unlike IgG, IgM is the largest pentameric immunoglobulin that has five or six units each composed of two heavy chains (mu-chains) and two light chains that are joined together by disulfide bonds. IgM constitutes about 5 – 10% of serum immunoglobulins in adults.

There are two forms of IgM

It is expressed as a membrane-bound antibody on B cells.

It is secreted by plasma cells.

Properties and Function of IgM

Key Differences between IgM and IgG

Antibodies are the proteins produced by B-lymphocytes to fight against any infections. IgM is the first antibody to fight against the attack of viruses of bacteria whereas IgG reacts later but helps in the permanent eradication of antigens by enhancing phagocytosis or opsonization.