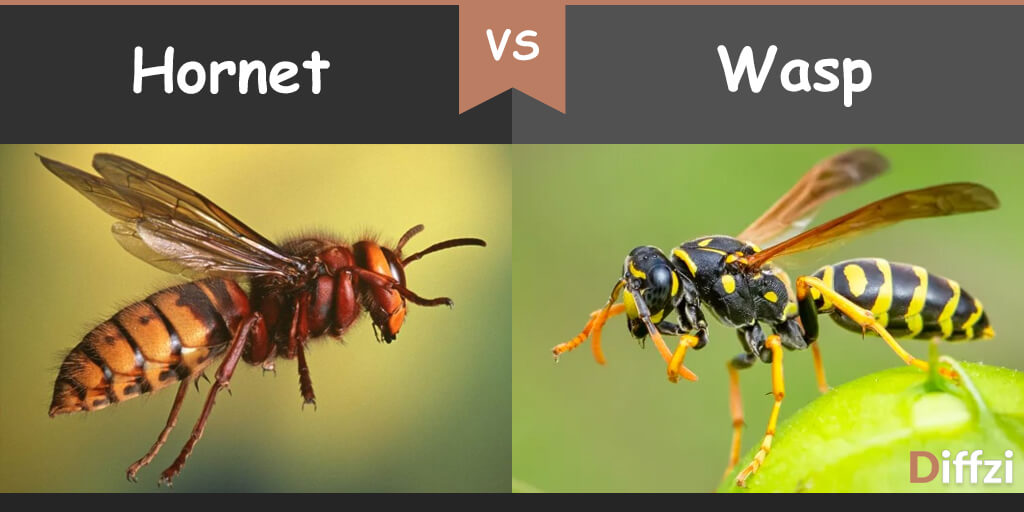 The main difference between hornet and wasp is their size and color, wasp are smaller than hornets, on the other hand, hornets are slower, clumsy, bigger that can be almost two inches in length.

Hornets and wasps belong to a Vespidae family, both wasps and hornets have a more aggressive nature, and they mostly attack by using their stinger if their nests are threatened.

The concept of hornets and wasps is very confusing; in the U.S. the hornets are defined as the bald-faced hornet or the European hornet, and the wasps the defined as the yellow jackets and the paper wasps.

Sometimes people think that sharks, bears, snake  are very dangerous  animals and can cause us damage but if you are an allergic person so even a bee, hornet or wasps can cause you a great damage to your health.

The following comparison chart will help you in describing the difference between hornets and wasps.

Hornets can be defined as species of wasps which have wider heads, rounded abdomens and a different life cycle, and are most likely to wasps in appearance, as it is very difficult to distinguish between wasps and hornets, especially from a large distance. Some species of hornets can be 5.5 cm in length.

Hornets are very aggressive and if their nests are threatened they can sting and their stings can be fatal and very dangerous to human life. They use stings to kill the pre to defend the nests. They made their nests by chewing wood to make a papery flesh. Every nest has a queen, who lays eggs and is attended by female workers who cannot lay fertile eggs.

Hornets are usually insectivores, as they eat insects. Here are some facts of hornets

Wasps are among the most diversified array of insects with more than 30,000 species that belong to the order Hymenoptera.

Wasps can be seen in every possible color from black to yellow, metallic blue, green, bright red, and orange. Wasps are divided into two groups, solitary wasps who lives alone and other are social wasps who live in colonies. Mostly they have a cast system consists of one or more queens, few drones (male) and female workers. The queen begins the colony in the spring season by building a small nest and lay eggs that hatch into workers. Their nest is made with the chewed up strips of bark mixed with the saliva to form a rag paper.

They are better for humans by controlling pest insect population that harms crops. Wasps eat grasshoppers, flies and other bees, can also eat nectar and fruits, even some wasps can eat human foods, which results in a big trouble at picnics. Here are some facts of wasps,

Key Differences between Hornet and Wasp

Hornets and wasps belong to a Vespidae family, wasps have more than 100,000 species and hornets are one of these species. We can distinguish hornets from wasps by their wider head and large abdomen, their life cycle is also different. Hornet sting can be more painful than wasps. Hornets are insectivores whereas wasps are carnivores. Hence there are more than thousands of species of wasps and new types are also being discovered.