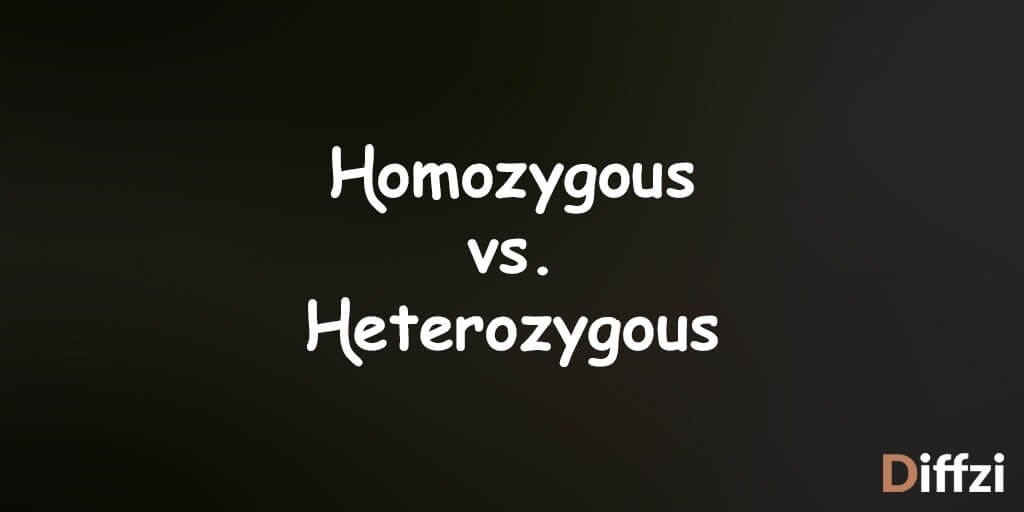 A homozygous genotype is represented by two letters both letters capital or both small, i.e. either PP or pp. Capital letters for a dominant trait for small letters for the recessive trait.  The homozygous individual possesses either  a dominant  or recessive trait but not both at a time.  A heterozygous trait is represented by one capital and one small letter, i.e. Pp.  P is for dominant
allele while p is for recessive allele. A heterozygous will possess the phenotypic trait specified by a dominant allele.

A homozygous will produce only one type of gamete while a heterozygous produces two types of gametes which are transmitted to the next generation.

Individuals with heterozygous genotype can combat environmental stress in a better way related to that phenotype. They have chances of evolution with good traits thatcan help their next generations to adapt more to their environment. This feature of having chances of good evolution is not possessed by homozygous individuals.

An organism is said to be homozygous for a trait when boththe gene versions (alleles) are identical for this specific gene. So this termdescribes the genotype of a diploid organism. Both dominant or both recessivealleles of a gene are present, I.e.genotype is either PP or pp. Thus the individual is attributed as homozygous dominant or homozygous recessive. Homozygous individuals produce only one type of gametes transferred to the next generation.

A diploid organism is said to be heterozygous for atrait  when both the gene versions(alleles) are not identical for that specific gene. This term describes the genotype of an individual when one dominant and one recessive allele is present,i.e. genotype of Pp. Heterozygous individuals produce two types of gametes which are transferred to the next generation. Thus chances of-of newgenetic combinations in the next generation are increased. Thus offspring of heterozygote individuals have greater ability to cope with the environmental stresses. Heterozygote individuals also show an extra vigour.

The examples of dominant and recessive traits in the humans
are

If the chromosome contains a
single copy of an allele and another one is missing in a diploid organism the
chromosome is termed as hemizygous.

When both alleles are mutant (complete depletion of a gene or complete loss of function) in a diploid organism, the chromosome is termed as nullizygous.

Key Differences between Homozygous and Heterozygous