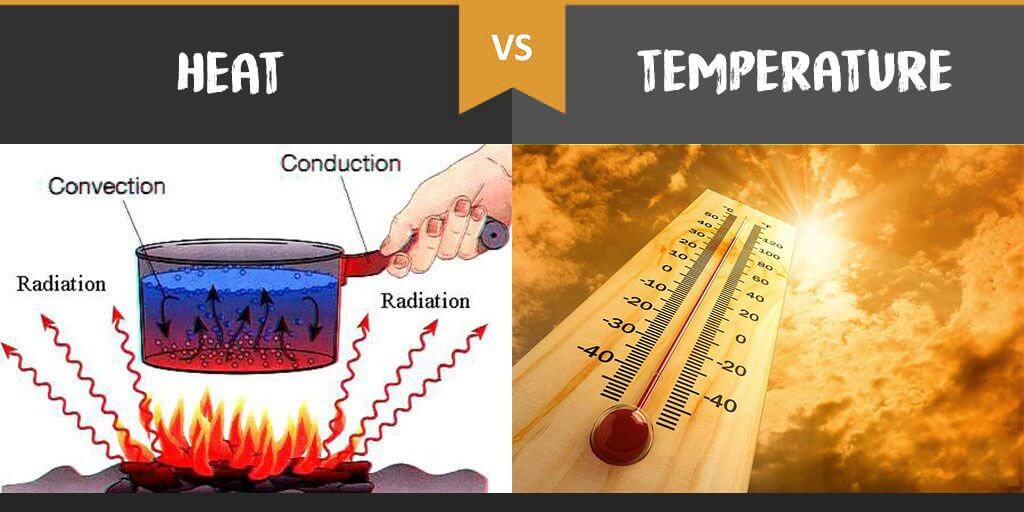 The concept of heat and temperature are analyzed together in mathematics, which is somewhat related but not equally. Both terms are common, due to their wide usage in our day to day life. There exist a fine line which demarcates heat from temperature, in the sense that heat is thought of, as a form of energy, but the temperature is a measure of energy.

In physic science, heat refers to the energy that is transfer by way of work or other matter. Generally, heat flows from a hotter object to a colder one. This transfer result in a net increase in entropy. This process can be direct, as in conduction and radiation while in case of indirect as in convective circulation. Generally heat refers to the process of transfer between two systems, the systems of interest and its surroundings considered as a system, not a state or property of a single system. The amount of energy transferred by way of heat is expressed in a SI unit of joule (J). Heat can be measured by calorimetry or by other scaling techniques that are based on the first law of thermodynamics. J. R. Partington – a British chemist – describes conduction as: “If a hot body is brought in conducting contact with a cold body, the temperature of the hot body falls and that of the cold body rises, and it is said that a quantity of heat passed form the hot body to the cold body.”

In physics, temperature refers to the measurement of hotness or coldness in an object by using a thermometer. Various scales and unites are used to measure temperature like the most common being used is Celsius (denoted by °C and also known as centigrade), Fahrenheit (denoted by °F) and in science by the name of Kelvin (denoted by K). Temperature is the measure of average heat or thermal energy of the molecules in a substance. For example, when we say an object temperature is 100 degrees, then it doesn’t mean that every single molecules has that exact thermal energy. In every substance, molecules are moving with a different range of energies, and are interacting with each other that changes their energies. Temperature is equally important in all fields of sciences such as biology, atmospheric science, physics, chemistry, geology, medicine, in short, in most aspects of daily life.

Key Differences between Heat and Temperature